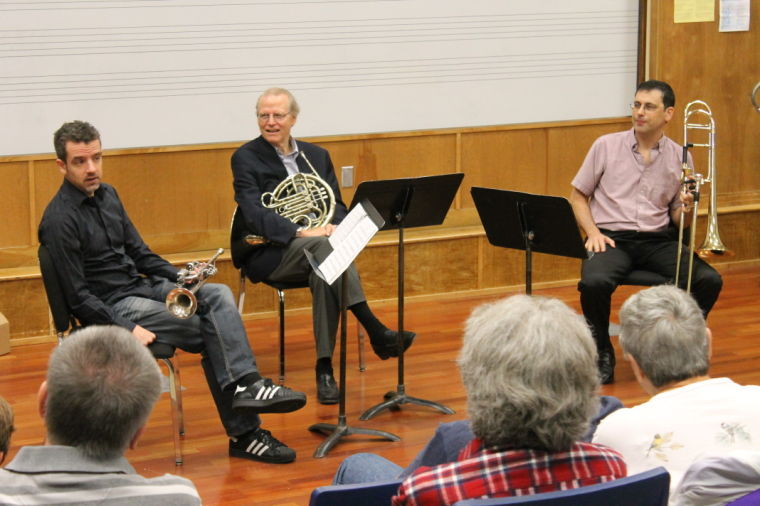 Washburn students, music and non-music alike, are excited about the new concert series presented by the Topeka Community Concert Association.

Sunday, September 29, TCCA kicked off the 83rd season with the New York Brass Arts Trio at White Concert Hall. Washburn students appreciated the free admission as the cost would have deterred many of them from going otherwise. Single tickets are normally $35.

“I’m glad that students were able to attend for free,” Dallas Connor, Washburn sophomore said. “It gives them the opportunity to broaden their music experiences.”

“It’s great they offer this for students because many are not exposed to such music culture. I’ve never been to New York City and haven’t been taught their form of expression so it was wonderful to experience,” Loomis said.

According to Washburn percussionist student Joshua Horvath, location was another high point.

“It is really refreshing to have music presentations here at Washburn University instead of other places,” Horvath said. “Topeka is not normally thought of as a culture hotbed like Lawrence or Kansas City. It’s nice, as students, to have things here and not have to commute.”

Brass students who attended the concert were especially impressed.

“It was mind blowing how intricate and intimate the playing was,” said Washburn brass student Jon Ward.

The New York Brass Arts Trio, born out of friendship, include trumpeter Joe Burgstaller, french hornist David Jolley and trombonist Haim Avitsur. They joked and were playful with the audience and each other between music arrangements; a repertoire they created of mixed Classical and Jazz pieces which included composers such as Bach and Beethoven.

“We grab music we like and play it,” Trombonist Haim Avitsur said during the master class given the following morning.

According to Carnegie Hall’s Musical Exchange, a master class is a class given by an expert, especially a musician, for exceptional students, usually presented in public or on television.

In addition to music performance accomplishments, each member of the trio maintain teaching positions at major American musical institutions. The New York Brass Trio presented their master class to students and the public Monday, September 30, at Washburn in the choral room from 9-10 a.m.

Those in attendance were able to enjoy an intimate, up close and personal, musical experience with the trio, listen to philosophies, laugh as the trumpeter and trombone player bantered back and forth, ask questions and take pictures.

“What did you take from the concert last night?” Avitsur, the trombone player, asked the group.

Around the room attendees spoke about how impressed they were with the full sound coming from such a small group and how excited the musicians seemed to be about their music.

A member of the public who attended the master class exclaimed to the trio, “You were having as much fun as we were…maybe more!”

Each member of the trio spoke about their passions, how they mentally prepare for performances, and how to get out of a rut.

French hornist David Jolley said he still has nerves before performances. Instead of playing over and over before a concert he started ‘visualizing’ instead which channels his anxiety.

“I go over music in my mind….again and again,” Jolley said. “I find visualizing saves my chops. Helps me stay calm. Most effective thing I ever found before I have to do something really hard.”

Trumpeter Joe Burgstaller stressed that musicians should not be concerned with what others do for them but rather what they do for themselves. Success will not come by just waiting on others nor will following a prescribed structure or series of steps guarantee a job.

“Just doesn’t work that way,” Burgstaller said. “Be a creator instead of a follower and you have more chance in the music business.”

Trombone player, Haim Avitsur stressed that playing instruments is not much different than an athlete preparing the body for a game and advised students to treat music with that same mind set…and of course to be excited about what they play.

“It’s about the excitement. You have to pursue it. Stay with it. If it works in the practice room it works on stage,” Avitsur said.

Washburn music student, Jon Ward, plays the trumpet and found the master class an eye opener. When he asked the trio how he could get out of a practice rut he was initially shocked by Joe Burgstaller’s answer but found the trumpeter’s advice helpful to avoid ruts and utilize practice time.

“It kind of smacked me in the face but the more I thought about it, the answer was so right. It has a lot to do with your surroundings and what’s going on in your life,” Ward said, “I’m probably going to practice now…I’m probably going to  have one of the best practices I’ve had.”

Nick Scott, Washburn music student, also plays the trumpet and feels this trio re-inspired him. He feels more motivated and believes this will help him with his own individual playing and practicing.

He said he would absolutely recommend these concerts to other brass students and was disappointed more didn’t show up.

“I will be telling them all that they really missed out on something really amazing,” Scott said.

For those who do not want to miss out on concerts like this look for future articles previewing upcoming performances or visit: