Construction on campus: an update 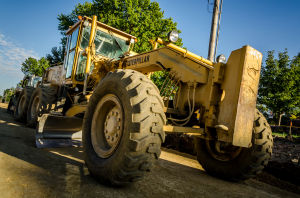 Washburn University is investing in the future of students and in its own. Plans were presented last year to give Washburn a facelift for its sesquicentennial celebration and projects have begun to pop up all over campus. Three of the most noticeable are 17th Street, Mabee Library and the energy efficient building upgrades.

Construction on 17th street has been under way since May of this year. The first phase that covered Washburn Avenue to College Avenue has been completed. Though slight inconveniences have occurred, all it took was some readjustments to find an alternate way to attend classes or to head over to the shops on the corner of 17th Street and Washburn.

“When construction started midsummer, it was slow. But people were supportive,” said Forrest Frazier-Wright, manager of PT’s Coffee at College Hill, “They still made the effort to go all the way around to our other entrance. Now that construction has moved on, it’s all back to normal.”

Mabee Library is also updating their accessibility and services for students. New offices have been added into the building, such as the Academic Success Center. Former offices and centers, like the tutoring center, have been relocated to accommodate the change. The tutoring center has been moved up to the third floor and has been given a larger area to host more students. The construction has also led to a change in the library’s hours of operation.

“Instead of being open until 2 a.m., we are only open until 11 p.m. In that sense, student traffic has increased during the day time to compensate for the shortened time we are open,” said Nicole Tempelmeyer, a student worker within Mabee Library.

Washburn University, along with Washburn Tech, has been on an energy efficient upgrade since fall of 2012. Almost all of the buildings on campus have or are in the process of obtaining upgrades to lighting, heating and air conditioning and water fixtures.

From the beginning of the school year until the second week of October Stoffer Science Hall students, faculty and staff and the have endured the sounds and smells of the renovation. Smells of tar from the rooftops have drifted downward into classrooms, labs and offices making it difficult for students to concentrate on their studies. The construction noises have not caused a grand commotion, with the exception of one day students in Organic Chemistry will not forget.

“One day the noise on the roof was so loud I couldn’t give my lecture the way I do,” said Sam Leung, Organic Chemistry professor, “The pounding on the roof was so powerful, the projector and screen were shaking. I don’t have a loud voice, so it was a challenge to teach class that day.”

Washburn will continue to experience similar inconveniences throughout the year, but the construstion should result in better traffic flow on 17th Street, a stronger student experience from Mabee Library and a more consistent environmental experience throughout all buildings on campus.