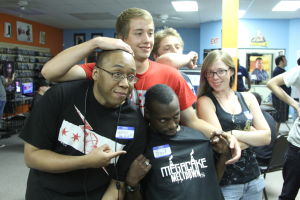 Over the weekend numerous gamers flocked to Topeka’s most recently opened video game store, Gamer’s HQ. The reason for the sudden influx was Megacake Meltdown, a two-day fighting game tournament where patrons could pay a fee of either $7 or $5, which allowed for access for the whole weekend, or one day, respectively.

Once the door charge, gamers was paid were able to play many console fighting games, as well as the shop’s many arcade machines, which were set to free play mode. Gamers were also able to participate in an official tournament for a fee of $3 per entry.

There were two tournaments over the course of the two days in Marvel VS Capcom 2 and Street Fighter Alpha 3. The entry money for each tournament went toward its prize. This meant that the more entries there were, the bigger the prize would be. Prizes were also given out as a part of an hourly raffle and ranged from action figures to Blu-Ray box sets.

“I’ve been to different events here before, but never on this magnitude,” said Tyler Hazelton, a Computer Repair and Technology student at Washburn Tech. “I had a lot of fun playing Playstation All-Stars Battle Royale, and would definitely come to future events.”

“The event was originally started by a few buddies of mine, Brail Watson and Marvin Smith, who put together something really cool, a giant fight tourney, and I was lucky enough to be chosen as the venue,” said Caleb Davis, owner of Gamer’s HQ.

A few students from Washburn and Washburn Tech were in attendance at the events participating in both tourneys and free play stations.

“It was a fun time, and enjoyed all the free play arcade machines,” said Micheal Reynolds, freshman music education major.