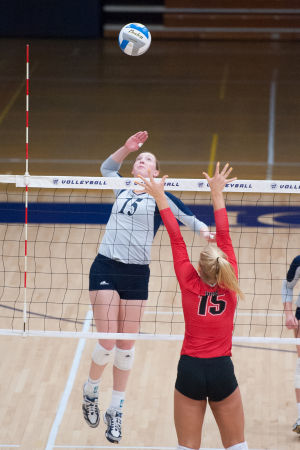 Freshman middle hitter Sarah Vicory helped lead the Ichabods through the first half of the season.

Sarah Vicory played soccer while growing up but it wasn’t until the end of the sixth grade when her friends’ mom convinced her to use her height advantage and start playing volleyball.

Vicory graduated from Washburn Rural High School in Topeka where she lettered in volleyball all four years. She earned the awards of first team all-city her freshman year, second team all-city her sophomore year, all-city and all-league her junior and senior years, and won the state championship her freshman, junior and senior years. Vicory also was a finalist for the national high school freshman of the year award.

Vicory is majoring in Physical Therapy Assistance at Washburn and wants to work rebound or rehab therapy in a hospital. She has spent a lot of time rehabbing her shoulder, knee and back. She found the work interesting and she likes it because it deals with sports.

Vicory chose to play at Washburn because it is close to her family.

“I just really like the atmosphere. I love Washburn and I want to be close to home,” said Vicory.

Vicory has known Coach Herron since she started playing volleyball and she loves the girls on the team.

So far, Vicory has enjoyed her experience at WU. She is glad about the people she has met and volleyball is going great.

Overall, Vicory thinks the Bods have done well this season.

Vicory attributes the team’s success to working hard in practice and wanting to win and do well. She plans on taking one game at a time; winning one and then looking forward to the next game.

“Even though she’s a freshman, she’s our strongest middle. She’s pretty quiet, but she contributes to our team a lot by leading in her play,” said junior libero Tessa Brophy.