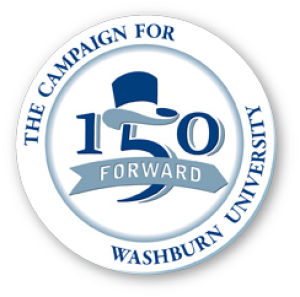 Before the announcement on Saturday the campaign had been in a private phase since 2009. During that phase, the Foundation’s Board of Trustees, a group of 100 distinguished alumni, helped to set the goals for the campaign. The goal was set at $100 million.

There are four areas, or “pillars,” of the campaign. Each has its own fundraising goal. The pillars are students, faculty and programs, spaces and annual giving.

“In this campaign we’ve really focused on the areas that we believe set Washburn apart and where we believe we can make the biggest difference in the future,” said Juli Mazachek, president of the Washburn University Foundation.

The goal for the student pillar is $35 million, most of which will go towards scholarships. The objective is to reduce the barriers to receiving a higher education by increasing the funds available to students by nearly 35%. Thirty-five million dollars is also the goal for the pillar of faculty and programs. This will support areas such as faculty development, professorships, lectures and technology upgrades.

“We hope that we can continue to attract the best professors that we can that are committed to teaching and to building relationships with students and to pushing them so they can be more than they thought they might have wanted to be in the first place,” said Mazachek.

The goal for the space pillar is $20 million. Much of this will go towards building the new Welcome Center in Morgan Hall. The entire building will be renovated and upgraded to meet the needs of students and reflect the quality of education that is received at Washburn. Annual giving, which supports a wide variety of areas on campus, has a goal of $10 million.

Together, the goals for the four pillars add up to the total $100 million goal. Approximately $55 million of the $100 million were raised during the private phase. The Foundation is going to conclude the public phase of this campaign and raise the final $45 million by 2016.

“We think that this campaign is going to be a magnificent success,” said Jerry Farley, president of Washburn University. “Being halfway to the goal so early in the campaign I think steers us in the right direction. We know that there are people that believe in Washburn, people that are passionate about Washburn, that are committed to Washburn, that are still waiting to make a donation to our campaign.”

In addition to the $100 million, there is a separate fundraising campaign to support building the new School of Law at Washburn. This will be the largest building project that the University has ever completed. The goal for that project is $20 million and the fundraising will continue through 2018. The law school is currently scheduled to open during the fall of 2018.

The kickoff event on Saturday began with receptions in both Bradbury Thompson Alumni Center and White Concert Hall. The program officially started at 8 p.m. in White Concert Hall with approximately 500 people in attendance. Farley and Mazachek welcomed guests, introduced the campaign and recognized those that made the campaign possible.

“Tonight, we’re here to share the vision of Washburn’s future,” said Farley. “A vision built on the pillars of the past and the directions of the future, pillars and values that have held strong for nearly 150 years.”

They were followed by various speakers including alumni and current students that shared their stories and spoke about what Washburn has meant to them and how beneficial this campaign will be for its future.

“I am so grateful for the scholarships I have received at Washburn,” said Bianca Martinez, first-generation student. “They’ve allowed me to focus on my academics. They’ve helped me to get more involved in my extracurricular activities and in organizations outside of the classroom.”

The slogan for the campaign is “Our Story. Our Time.” The Washburn University Foundation has $163.4 million in total assets and ranks in the top 50 of public institutions for endowment per student full-time equivalent (FTE), according to the 2012 NACUBO-Commonfund Study of Endowments. Their core values include integrity, stewardship, collaboration and teamwork, respect, responsiveness, accountability and continuous support.

“This is only possible because generations of alumni and friends that have come before and been impacted by Washburn University have made the decision to give back,” said Mazachek. “Without their support for the vision and dreams of Washburn University this wouldn’t be possible.”