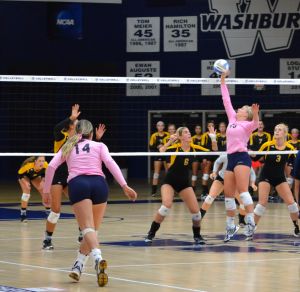 The Washburn Ichabod soccer and volleyball team both defeated the Fort Hays State tigers this evening. The soccer team won 2-1 and the volleyball won 3-0.

The windy soccer match started off with the tiger’s lead 1-0 when Amanda Tallbott scored off a free kick in the sixth minute. Senior midefielder, Lara Doescher scored her first goal of the season right before the end of the first half to tie the game 1-1. Doescher also scored off a free kick and led the team with three shots on goal.

The match had over 30 whistles blown and the goalie from each team both received yellow cards.

The second half started with a quick goal after another free kick from the Ichabod’s Megan Buckley to Caysie Beetley who found senior midfielder, Brianna Ament, who scored the final goal of the game.

However, the outcome came down to the final seconds of the match. The tigers had an opportunity to score with a corner kick, but Washburn’s junior goalie Tori Fuglister saved the goal and sealed the victory for the Ichabods. The Bods are now 2-2-0 in the MIAA standings and will face Nebraska-Kearney Sunday at 1 p.m. at Yager Stadium.

The Washburn Volleyball also dominated the tigers during their pink out game. The Ichabods won the first set 25-20, the second 25-21 and the third set 25-13. The Bods lead the entire match, except for a small time in the second set.

The top scorers for the Bods where Leanna Willer with 15 kills and 11 digs, Kelsey Lewis with three aces and 12 digs, Abby Wittman with 36 assists and Marissa Cox with eight kills. Cox also earned her second straight MIAA hitter of the week award in the MIAA conference.

The Ichabods are now 4-0 against MIAA conference teams. Their next match is also against the undefeated Nebraska-Kearney Saturday at 3 p.m. in Lee Arena.