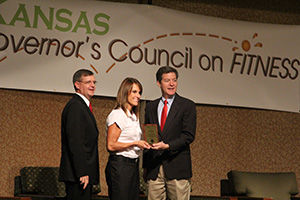 Sept. 30, the downtown Ramada hosted a number of people, including governor Sam Brownback himself. The occasion was the second annual Kansas Obesity Summit, an event that was hosted by the Get Active Kansas movement, a division of the Kansas Governor’s Council on Fitness.

Attendees and members of the event’s panels came from all across the state and attended the event 10 a.m. to 2 p.m.

Three panels took place over the course of the day and were all hosted in the Ramada’s grand ballroom. The first panel was a community showcase, which had a group of people who were all  part of different organizations decreasing obesity. The panelists shared their success stories and gave tips to people looking to succeed in starting or perfecting their own fitness oriented organization.

JoDee Altman was one of these panelists, and attended representing the Center for Health Improvement at Hays Medical Center, which received an honorable mention award during this year’s awards ceremony. Altman explained what the medical center was about, saying, they are a medical wellness facility that offers a variety of programs aimed at improving the health of our community including decreasing obesity.

The second panel was actually at the previously mentioned awards ceremony where Brownback presented the awards to individuals and organizations especially dedicated to declining obesity.

Lisa Mortz, from Tribune, won the award for an individual’s efforts against obesity for her organizing of races, as well as other wellness and fitness programs in her community.

Another honorable mention, this time for organizations, was presented to Scott Wadle who  representer the Wichita and Sedgwick County Metropolitan Planning Department.

“We feel very fortunate to be nominated for the award being presented here at the obesity summit,” said Wadle.

The third and final panel was the school showcase board. This panel was similar to the previous community showcase, but featured teachers and school board member sharing tips and stories instead of general community members. Panelists included Rhonda Holt from the “Let’s Move! Kansas Schools” program and Tracy Johnson from the Garden City Schools Wellness Initiative, to name a few.

The event seemed to be an overall success, and while no actual numbers relating to a downturn in obesity rates were shared, Brownback seemed optimistic, saying

“We started the summit last year to work on bringing down the obesity rate and talk about activities that could drive those numbers down,” said Brownback. “While I don’t have the [obesity rate] numbers comparing this year and last year, we had a successful state employee event where a number of people lost weight and we founded this group to help people spread programs like that around their own communities.”

The governor finished by saying he wants to urge people who are struggling with weight loss to not give up. And to the people around them, don’t judge them.