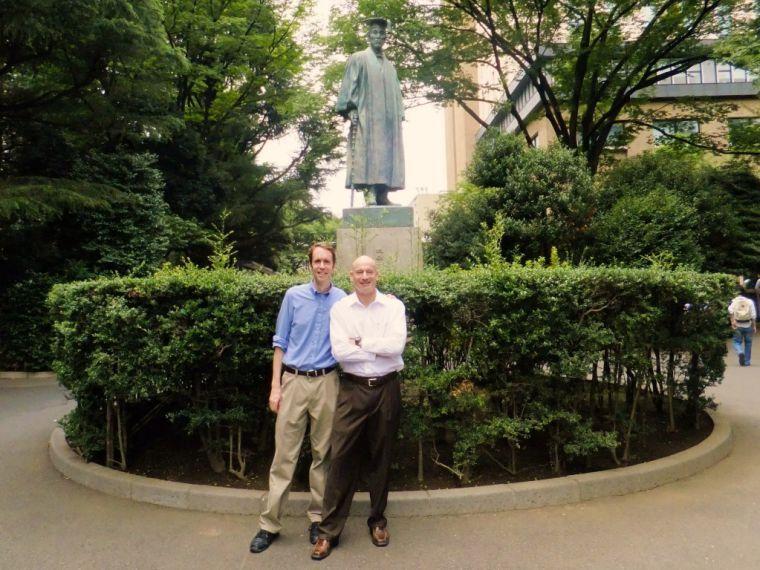 Alex Glashausser and Craig Martin stand in front of the statue of Okuma Shigenobu, founder of Waseda. (Okuma Shigenobu was the 8th and the 17th Prime Minister of Japan.)

Professor of law Alex Glashausser, who teaches Civil Procedure, Remedies and Torts at Washburn Law, spent two months as a visiting scholar at Waseda University in Tokyo, Japan where he presented lectures and worked on research. Tokyo is the capital of Japan and considered the largest metropolitan area of the world.

While in Osaka, Martin taught an introductory course on Anglo-American Constitutional Law and also conducted research on the war-renouncing provision (Article 9) of Japan’s Constitution. He gave a faculty seminar on the current constitutional amendment debate in Japan, and spoke to students of the law school about the legal market in North America.

“I go back, not every year, but I’ve been back many years in-between to teach various courses,” Martin said. “Usually involving comparative constitutional law. Sometimes I teach in Japanese, sometimes in English.”

Martin has returned to Japan at least ten times since graduating. Glashausser’s visit this summer was his fifth in five years.

Glashausser first visited Japan after graduating from Harvard in 1990 to study at the Yoshida Institute of Japanese Language. He also studied the Japanese legal system at Santa Clara University School of Law’s Institute of International and Comparative Law in Tokyo.

Martin first attended Osaka University years ago as a scholarship student after serving as an officer in the Canadian Navy.

“I spent the first six months every day, all day, studying Japanese,” Martin said, “It was very intense.”

Although both professors learned the Japanese language as students and now speak it fluently, Glashausser, who often speaks with his wife in Japanese, explains that teaching it isn’t always so easy.

“I can have everyday conversations in Japanese but talking about law in Japanese is much harder,” Glashausser said.

Law presents a language of its own that can be difficult to learn, even in one’s own tongue, so trying to teach it in another language can be quite challenging.

Glashausser often shares his experience of learning Japanese to his Washburn law students on their first day of school. He thought he could never do it but refers to it as a big mountain that must be chipped at day by day, eventually proving success.

“Likewise, with the law when you open your first law book it looks impossible. You don’t think you’ll ever understand it but eventually you will,” he tells his students.

“It’s a thrill to be able to have your oral works delivered to a foreign audience,” Glashausser said. “And to see the written work translated as well.”

Glashausser found Waseda’s library “fantastic” in terms of providing plenty of resources for his research, especially considering he was studying American Law in a foreign library. The only downfall was that the older buildings in Japan were built without tall people in mind, so Glashausser, who is over 6 feet, had to spend the entire time at this library ducking his head. (see photo)

Glashausser and his family, who traveled with him, stayed in an apartment on campus which was close to a nature park and a variety of ethnic restaurants. His two sons attended a summer school taught in Japanese with other students striving to learn the language better. As his wife is from Japan, they visited with family as well.

Professor Martin, who went to Tokyo for a few days to meet with various officials, met up with Professor Glashauser who gave him a tour of the Waseda campus. (see photo)

“It had the names of all the Japanese, all the Americans, all the British…all nationalities,” Martin said. “I had never seen anything like that before in a war memorial. It included everyone. It was an objective view of the sacrifices at war.”

Although neither of the professors are originally from Kansas, one is from Canada and the other from New Jersey, both enjoy teaching at Washburn and Japan.

Glashausser, who had never been to Kansas before interviewing with Washburn said he based his decision on where to teach where he could feel comfortable and thrive. He thought Washburn Law could be that place.

“That was 14 years ago. I was right. Washburn was that place,” the professor with New Jersey roots said.

Martin, who also serves as a bridge between two places, is excited about the expanding relationship Washburn Law and Japanese schools are planning for the future.

Professors Glashausser and Martin have also had pieces recently published in the Huffington Post. To read more visit: