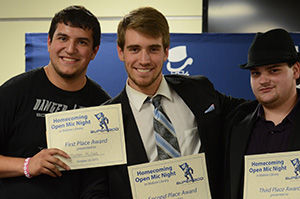 Where else are you going to find a group of people with a wide array of talent but at an Open Mic Night? That is exactly what students and faculty found at this week’s Homecoming Open Mic Night held at Mabee Library at 7 p.m. on Wednesday the Oct. 23. The always-entertaining Sean Bird, assistant dean of Mabee Library, was presiding and while there were only 10 acts, Bird made the show a complete production.

It would seem a tough way to spend a Wednesday evening, having to choose the top three acts but the judging panel had some great performances to view. Bryce Korf, third place winner, from the Washburn Players started off the night with a wonderful rendition of “Dream On” by Aerosmith, followed by four poetry readings that Omar Chavez, a member of Hispanic American Leaders Organization (HALO), wrote over the last several years.

The third act, Kelsea Shellenberger, was loudly cheered on by her Alpha Phi sisters and confessed that it was her first time performing in front of an audience and it was a terrifying experience for her. She sat on stage and sang a song with only her voice and guitar to accompany her. The end of her song did not end quietly as her fellow sisters cheered her on.

The comedy act of the night was not just Bird, but Molly Rondeau with Zeta Tau Alpha also had everyone in stitches regaling us with stories of her bowl cut hair and Show-and-Share in her kindergarten class.

WU Cheer members Brittany Schuman and Baylee Kampfe brought to stage a new version of “I’ll Make a Man Out of You”, the signature song from Disney’s Mulan, by changing the word “man” to “Bod”. Dressed in Karate gear and sporting sparkling pink headbands, the two had many clapping and singing along by the end of the number.

The night’s big winner was Thomas McGee, a freshman art student who showed his beat box skills, many of which he picked up over the summer. McGee said, “This was a pretty new experience for me as I had never done beat box with a mic before. I usually just do it as I wait for my girlfriend outside of class.”

McGee’s beat boxing was quickly followed by a personal story written and rapped by Corey Boehmer and then followed by a dramatic and intense reading of Green Eggs and Ham by drama duo Adam Fritz and Brendan Funk of Kappa Sigma, complete with props and feelings.

The last two acts were a cover of “Clarity” by singer Bethany Curtis, who is a Junior, and the night’s second place winner, Conner England, with Delta Chi, who did a spoken word response to “Man Up” as seen in advertising to men. Conner is a sophomore studying Economics and stated that he “wanted to change the fraternity stereotype of the ‘tank top bro’” and he has done “many things that fit into that [stereotype] and I just don’t need to do that and what I care about is outside of that dynamic.”

The top three winners were given plaques and those representing an organization or chapter will have their scores added to the total spirit point for that organizations/chapter. Overall, the winner was the audience that was lucky enough to partake in a homecoming tradition that did not disappoint.