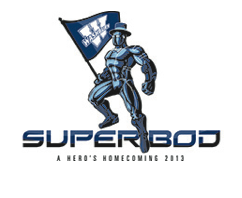 The theme for this homecoming is "Superbods." Homecoming starts on Monday.

The 2013 Homecoming will stay true to tradition with a few new improvements. Homecoming, beginning Oct. 21, will hold many activities for student organizations such as fraternities, sororities, WSGA and many other clubs and individual students.

Jessica Barraclough, director of Student Activities and Greek Life, wants to make sure homecoming is inviting to all students on campus, not only those in Greek life or student government.

“Homecoming brings out school spirit from everyone,” said Barraclough. “It’s not for just one type of organization or student. It’s a time for everyone to be involved and engaged on campus.”

Tori Carter, senior history major and vice president of the Panhellenic Council, also has high hopes for the participants in the homecoming events.

“I think this is one way people who are normally behind the scenes at the university can be more involved and do more things,” said Carter.

Most of Homecoming’s usual annual events and activities will be held this year, including the top hat competition, banners from organizations and clubs, “Yell Like Hell” and the parade before the football game. However, most of these events will receive new improvements.

“There is a new category in the top hat competition, ‘Best Wearable Hat’,” said Barraclough.

There will also be a change in the parade route due to construction. The new route will make its way through campus to 21st St.

“We will be serving hot chocolate and other drinks,” said Barraclough. “We’re also providing bags for children to collect candy in this year.”

Homecoming week will kick off with top hat judging, 5 p.m., Oct. 21, followed by the homecoming ball at 7 p.m. The candidates for homecoming queen and king will be announced at the ball.

Banners will be hung around the Memorial Union on Tuesday, along with the Ichabod Race at 6 p.m.

Homecoming will continue Wednesday with a Scorch on the Porch from 11 a.m. – 1:30 p.m, decoration judging for chapters and residence halls and “Open Mic Night” at 7 p.m. at Mabee library.

Voting for royalty will end at 1 p.m Friday and the top hat auction will be held from 5-7 p.m. that night.

Saturday, Oct. 26, the parade will be held at 10 a.m. Washburn will take on Lindenwood University in the Homecoming football game at 1 p.m.