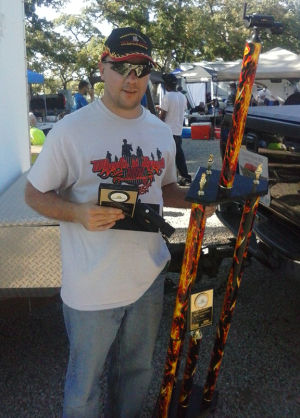 Shawnee Lake played host to the fifth annual “Smoke on the Water,” barbecue cook-off this past weekend. The competitive event between 43 teams started on Friday and ran through Saturday afternoon. This event was part of a chain of stops sanctioned by the Kansas City Barbecue Society as chefs try to make their way to the American Royal Barbeque tournament in Kansas City, Mo.

“Teams have traveled here from all over, Lawrence, Topeka, Kansas City, even as far as Missouri,” said Josh Sturm, the event coordinator. “43 teams entered, we were hoping to max out at 48, but we did get what we were looking for.”

Competitors follow a set of rules set up by the KCBS. This insures an even playing field for all the competitors.

“I enjoy just hanging out, smelling the barbecue, being at the lake and seeing smiles on people’s faces as I am able to provide a venue for people to do what they enjoy. Seeing them smile brings a smile to my face as well,” said Josh with a grin on his face.

“We have a ten minute window to get our meat in to the judges,” says Tim Flory of Crimson and Blue BBQ as he prepares his brisket. “Five minutes before and five minutes after the scheduled time. If we are a second late we are out. Meat is judged by six judges on appearance, taste, and tenderness on a ten-point scale for a total of one hundred eighty points. At one hundred sixty points, meat is good. At one hundred seventy points, meat is stellar.”

After all the meat was judged and the points tallied, overall champions were awarded. Second place, or Reserve Grand Champion went to Black Eye Barbeque. The overall Grand Champion was awarded to ChickHoovenSwine BBQ Catering out of Spring Hill, Kan.

“It’s really nice getting this win,” said Eric Westervelt, Pit Boss of ChickHoovenSwine BBQ Catering. “This is my first win this year and my first time competing in Topeka. This was a great contest at a great location during a great time of the year. This isn’t my only highlight this year. I was chosen at the last American Royal to work as a featured chef in the Power and Light District in Kansas City. It will be a good time with good food.”