‘Tamara’ is a Halloween Netflix pick for October 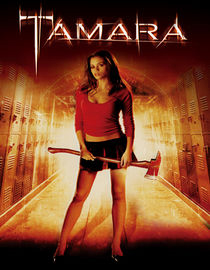 "Tamara" is a horror movie to watch on Netflix if you are looking for something different in the horror drama and I give it a five out of five.

It is the month of Oct. and that means it is time for scary movies and while on Netflix I found a movie that came out in 2005 called “Tamara.” It is about a girl in high school who is bulled by different groups at her school. Tamara, played by Jenna Dewan-Tatum, ends up being killed and returns from the dead to seek vengeance.

The movie has great special effects that are used in it. I especially liked this one scene where Tamara is talking to one of her classmates who she is getting revenge on about what its like to be dead. As Tamara does this, the classmate’s body starts to decay and he starts to have worms coming out of his arm. It turns out that it is not real, but is an excellent scene of creativity that I found very cool.

I also like the scene where she touches someone and once this happen they become under her control and then she tells them how she wants them to kill themselves. One scene where this is cool to see is the part where she tells her dad to finish the whole bottle of beer. After that Tamara dad starts to eat the bottle that he just finished. This just makes it a twisted scene that just got me to get more into the movie.

I also like the cinematography because in one of the scenes they have Tamara at the beginning of the movie in low lighting casting a spell on her unsuspecting victim and you never see her you just see her hands mixing up the spell. This is what got me prepared for the whole movie and made me want to continue watching it. It was also an excellent scene of foreshadowing for something that comes up later in the movie.

The other thing I liked was the music because it fit for Tamara coming back from the dead and seeking vengeance. There is a scene where she is up close and personal with her victims who are scared out of their minds. This heightens the scene for me and made me wonder what was going to happen next.

This is a movie that I enjoyed because it is out of the norm for the type of horror movies I usually watch. I also did not know what to expect from it. I just liked the creativity and thought process that went into this movie. Netflix users give this movie a 3 out of 5. I would have to give this movie a 5 out of 5.

If this movie peeks you’re interest and you like it then here are some more movies that you might also like. They are movies like “A Nightmare on Elm Street”, “Poltergeist 2”: “The other side”, “The craft” and “Blade 2”. So go and check “Tamara” out and see these other movies as well.