Superbods take to the street for the 2013 homecoming parade 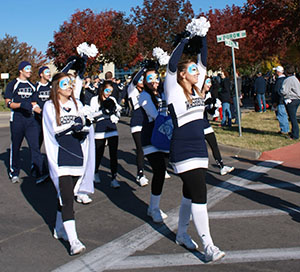 All of the homecoming week activities impressed Topeka once again with its diversity and beauty. The Ichabods celebrated by rejoicing up on the streets for the homecoming parade starting at 10 a.m. on Saturday.

Due to the construction, the parade route had to turn south on Washburn, then turned west on 21st Street and finished by looping around and back onto campus.

“I am very excited to be in the parade with my wife and my kids,” said Ben Marx, assistant director of SRWC. “People collaborate together and meet each other. It is great out of the office experience that is really fun for everyone.”

The Leadership Institute had an excellent opportunity to become a more visible organization on campus by embracing the challenge from Student Activities and Greek Life to participate in the parade. All participants, however, dedicated a lot of time and effort towards the parade. Many organizations created their floats with unique style and symbolism.

Also, people were excited to put on their own superhero costumes. The float from Alpha Phi had a lion getting knocked off by a WU superhero as representation of the future defeat of Lindenwood University at the homecoming football game.

Representing 43 countries around the world, the International Club asked international students to share their culture by wearing their traditional clothing during the parade.

“I think the sound, the colors and the spirit represented the best of Washburn,” said Baili Zhang, director of International Programs. “It portrayed the diversity, which is the big component of Washburn education.”

Andy Vogel, the coordinator of the International House said, “Today is a beautiful day and I’m excited to see a lot of international students participate in their first homecoming parade.”

One of the highlights of the parade, aside from the diversity of floats and people dressed up in accordance with the theme—Superbods: A Hero’s Homecoming, was Washburn University’s marching band that casted a spell on the public with their performance.

Michael Mapp, interim director of bands, said he was pleased with the professionalism and positive attitudes of the band towards their duties.

“The kids and I are excited to play at the parade. It will be a joy,” said Mapp.

“For me, the parade brings everybody together and summarizes the whole week of activities and fun on campus before the football game,” said Shannon Miller, freshman biology major.

Miller has already had the chance to participate in the Washburn University homecoming parade as a member of the Topeka High School marching band and was happy for the university’s band to get recognition.

“I am super excited to have the other view on it by marching at the same homecoming parade but now as a part of Washburn’s band and playing an alto-saxophone,” said Miller.

“The parade is a chance to bring the whole community together, “said Kelsey Schweer, junior communications major.