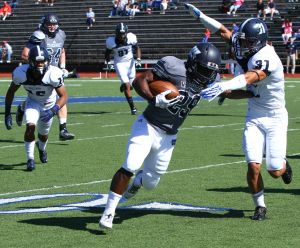 Lincoln came into this game without their starting quarterback, junior, Jacob Morris and it showed. They were unable to move the ball against the MIAA’s top ranked scoring defense. The Ichabods, on the other hand, had no problem moving the ball or scoring. The first 51 points of the game went to the home team and the Blue Tigers weren’t able to respond with a score of their own until there were just 11 minutes left in the game.

The Washburn squad took advantage of the lopsided score, giving almost all of their starters at least the final quarter off. It wasn’t until then that Lincoln was able to put together a sustained drive of over 60 yards and score.

The Ichabod defense only allowed 4.2 yards per play, and just 2.8 yards per carry. The Ichabods were able to pick off  Tiger’s senior backup quarterback Percy Turner, who is normally a wide receiver, twice and allowed him to complete just over 57 percent of his passes. Senior linebackers Willie Williams and Bryce Atagi both got their third interception on the season.

The conferences top defense is now giving up just 14.6 points per game. That stat is even more impressive considering that the offense is scoring 46.4 points per game, outscoring their opponents 290 to 80.

Washburn has racked up just over 1,000 yards in their first six games and have stymied opposing rushers, giving up less than 100 yards per game on the ground. This week they held one of the conference’s best running backs, senior Morris Henderson, to just 97 yards on 26 carries.

Junior running back Vershon Moore got the majority of the carries, accumulating 88 yards and three scores on his first 14 opportunities. He also caught four passes for 58 yards. With starting junior wide outs DaJuan Beard and Tyrell Brown both out for at least another week with thumb injuries and sophomore speedster Jordan Hart out indefinitely with an ankle injury, everyone will be counted on to contribute in the passing game. Senior tight end Tore’ Hurst hauled in four passes for 91 yards and a touchdown, and now leads the team with 22 receptions, 395 yards, and three touchdowns. The only remaining starter at wide receiver, senior Matt Kobbeman, led the team in receptions with six and yards with 94, but failed to get in the end zone.

Junior quarterback Mitch Buhler still had a good game despite his lack of receivers. He ended the game 15 of 19 through the air for 271 yards and a touchdown. He also added one of his team’s five rushing touchdowns on a QB sneak.

Last week’s breakout performer, red-shirt freshman linebacker Cody Heiman, saw a dip in production. After playing running back due to injuries in the Ichabod backfield he carried 26 times for 132 yards and two touchdowns. This week he only carried ten times for 36 yards and one score. The 6’ 3” 245 pound linebacker is quite a change of pace compared to the speedy starters Sean McPherson and Moore. While he had a quite a game against Southwest Baptist, his high volume of carries was largely due to the fact that Moore wasn’t able to travel with the team due to conditions of his parole, which will not be a factor from here on out. Heiman’s opportunities are likely to be fewer in the next few weeks with McPherson also projected to come back from his knee sprain two weeks from now against Lindenwood.

This week the Ichabods take on an unfamiliar opponent in a nonconference game. Fort Valley State University, out of Fort Valley Georgia, will make the trip to Yager Stadium this Thursday. Washburn looks to avoid the upset as the Wildcats come in with a 2-4 record and have lost their last two games.