Veterans Day Ceremony to be held at Washburn University 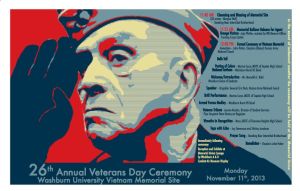 Washburn University will hold its 26th annual Veterans Day ceremony Monday, Nov, 11. The ceremony will be held at the Vietnam Memorial site located at the southeast corner of Morgan Hall. Everyone is invited.

Students, mostly from local veterans groups, were the original driving force in creating the memorial and a ceremony in honor of those students who had sacrificed their lives for freedom 26 years ago. After less than a year of planning, designing and raising funds, the memorial was completed in time for a dedication ceremony on Veterans Day, Nov. 11, 1988.

Washburn alumn, Chris Hutton designed the monument, which features the names of 47 individual students connected with Washburn who were killed in action. There is no other memorial or mention of Washburn’s Vietnam servicemen who forfeited their lives anywhere else on campus or in Topeka.

“I sure don’t do it by myself,” said Kessler, “I have a great committee.”

Pre-ceremony events begin at 11:40 a.m. and include a memorial site cleansing by the Standing Bear Intertribal Brotherhood. The formal ceremony begins at noon. The speaker is Brigadier General Eric Peck of the Kansas Army National Guard.

A reception and exhibits will immediately follow at the Memorial Union, Lounge by Washburn A & B. Included in the exhibits this year is a POW/MIA table to honor prisoners of war and those missing in action. In the event of inclement weather the ceremony will also be moved indoors to the Memorial Union. The event has only been held indoors once.

“It was a pretty difficult decision because we feel like if Veterans can make that ultimate sacrifice we should be able to withstand any kind of weather,” Kessler said.

The event is planned a little differently each year but Kessler said the overall purpose remains the same.

“We are honoring the veterans who have served but also those who are still in service as we speak and the families who support those service members. It’s something that we don’t ever want to forget about,” said Kessler.

The names listed on the Washburn Vietnam memorial include:

Plans are being discussed for possibly redesigning the aging memorial.

For more information about the memorial or this event contact Jeanne Kessler at Washburn Student Services or visit: