Night at the Farley’s 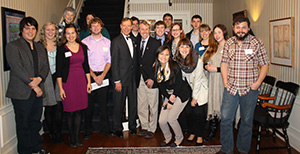 A couple of times a month, President Jerry B. Farley and his wife, Susan, host a group of roughly 24 students and a guest speaker at their house for dinner and conversation. The students are usually randomly chosen to attend and are invited by Mrs. Farley.

President Farley started the evening by thanking people for coming and introducing the guest speaker. Each dinner session is led by a guest speaker, who brings a topic and then opens the floor to the students and divides them into three groups for discussion. Students are encouraged to engage and ask questions.

The guest speaker for this session was Sean C. Bird, assistant dean of Mabee Library. Bird’s topic for the evening was information literacy and privacy.

“I like looking at information in a different way” said Bird.

Bird has been involved in the Dinner with the Farley’s for the last two years and has really enjoyed experiencing the interaction with the students and having the opportunity to mold minds outside of the library.

“When I was at Washburn, it was simply ideas that had been given form” said Bird. “Something, someone had read or said. Info is much different now. Info is now zeros and ones. Everything you do is now stored somewhere.”

Bird also talked about how Google has come into play. Bird quoted past Google CEO Eric Schmidt as saying that Google gathered more information in two days than the amount gathered from the dawn of time to 2003. This equates about five exabytes (one exabyte is one billion gigabyte) in two days.

With the influx in information available, the question need to be asked if people are secure on the internet. How much information are people willing to provide to have convenience was a big discussion topic and one that many students had opinions about.

“Convenience is a good thing” said Keisha Grier, senior business major. “Amazon offers me a suggestion and I like to use those to make decisions. Much of our information is not private so what is the difference?”

President Farley told the group about how he and his wife had worked with the government to supply fingerprints, pictures and other documentation in order to no longer have to remove their shoes when they are going through security. This matter of convenience is something the Farleys were willing to give up a part of their privacy for.

“Privacy is not defined in the Constitution, said Kinsey Ashworth a sophomore History major. “But privacy or a semblance of privacy is guaranteed in the constitution.”

One of the perks of being invited to these discussions is the ability to meet new people that you connect with and can see on campus.

“I love the diversity in age and different opinions. This is the type of atmosphere that Washburn has and allows to meet new people all the time” said Bridget Koch a freshman radiology major.

If interested in joining the Farley’s for a night of food and conversation, contact President Farley’s office at 670-1556 or email the office intern at [email protected]