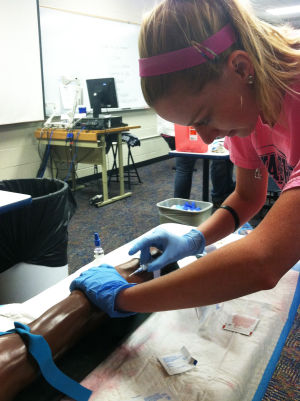 Williams maintained a 4.0 GPA during her first semester and is currently enrolled in her second semester in addition to working as an aide at St. Francis Health Center. Last semester she practiced taking vital signs and doing patient assessments.

Nursing students practice giving injections on food, like hot dogs and oranges. Next they practice IVs on rubber arms and then on their classmates.

“It sounds worse than it is, it really isn’t that bad. It is easier to do on people than it is to do on food,” said Williams.

There are various ways of learning in nursing school. The main course textbooks are all electronic. Textbooks that help the students prepare for the NCLEX are accompanied by online lessons and practice tests. There are also virtual lectures online that students listen to outside of class.

The nursing program at Washburn has recently changed its curriculum. Williams’ class was the first class to be introduced to new curriculum. Katie Cox is in her final semester of nursing school and will be graduating this December. As a student in the old curriculum she had to buy a package of books that cost her $1,000. She admits that although it would be nice not to be forced to carry her books around, she prefers to have an actual book in front of her.

Cox is finished with class work and has completed her finals. She is currently finishing her capstone at Stormont Vail. Capstones are the last clinicals for students and consist of eight 12-hour shifts. Clinicals are when students go to a nursing facility and care of patients using the skills they learned in school.

“It also helps you network and find a job,” said Cox.

Cox is currently working the nightshift in pediatrics. She also enjoys being able to do things by herself now that she is in capstone. After graduation she hopes to get a job in pediatrics at Stormont.

“My favorite part about pediatrics is holding the babies. I never got to in my OB clinicals,” said Cox.

Out of the 65 students in William’s class, only four of them are male. Many guys in nursing school make a joke of being a nurse (a male nurse). She thinks that male nurses are often stereotyped.

“Nursing is a very caring, nurturing and comforting career. It comes natural for women,” said Williams.

Williams believes that there needs to be more male nurses. Women usually prefer women to take care of them, and men would rather have another male care for them.

“As long as you ignore the stereotype you’ll be okay,” said Cox.