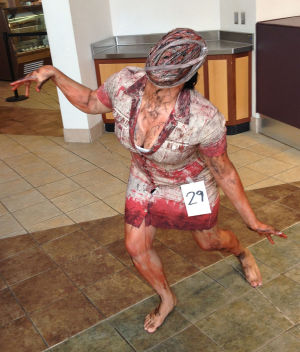 This Halloween, the Union Market saw a whole host of famous faces and creepy creations during the fifth annual Hallo-WU-een Costume Contest, joint hosted by the Ichabod Shop and the CAB.  A panel of judges evaluated students and their costumes based on a number of variables in numerous themes included “Scary”, “Pop Culture”, “Couple/Group Costumes”, “Most Creative” and “Spirit of Washburn.”

Participation in the costume contest was open to both Washburn students and staff. The only restriction being that a participant could only apply for one category. Many of the costumes from the event are visible in the gallery, but some of the highlights that went unrecognized by the judges were Meg Calvert, an undecided freshmen, as Megara from Disney’s Hercules; Scott Tucker, an industrial technology student, as Clark Kent and Sharon McCourt-Ostrowksi, a junior psychology major, as Darth Vader.

“This has been a lot of fun, […] I love dressing up for Halloween, so I hope to [attend next year] ” said McCourt-Ostrowksi.

Although there were many costumes, only a select few were good enough to be crowned the best in their category. Michala Keeler, a worker in the financial aid office won the “Spirit of Washburn” category with her identity thief costume, which made clever use of old financial aid worker nametags. Washburn student Katie Krug won “Most Creative” with her murdered masquerade-goer costume. The only entry and obvious winners in the “Couple/Group Costumes” were the Cat in the Hat’s Thing 1 and Thing 2 as portrayed by Nate Dingman and Sara Unruh, who work in Course Materials at the Ichabod Shop. The winner in the “Pop Culture” category was Amanda Hughes, the assistant director of university relations and Washburn alumnae. Finally, the winner in the “Scary” category, as well as the overall winner was Michelle Hernandez and her interpretation of one of the demon nurses from the film and video game series, Silent Hill. Winners in each category were presented with a gift certificate for the Ichabod Shop.

Overall the event seemed to be quite the success and has plenty of room to grow, according to Jessica Barraclough, the director of Student Activities and Greek Life. “Next year, maybe since it’s [the costume contest is] starting to catch on and students are starting to come out all decked, we can look forward to bigger prizes and potentially more categories. There’s lots [sic]of opportunities there. “