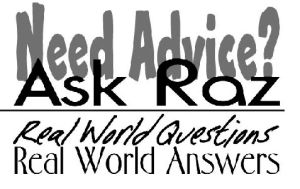 If you would like Raz’s advice, email your question to [email protected]

Question: desperately want to break up w/my girlfriend but don’t know how. Help?

Answer: Stop being a giant coward and do it if that’s what you want to do. Yeah, really.

Relationships are never easy. Ending relationships/break ups are never easy. Getting together is rarely easy. There is nothing “easy” about two humans interacting with each other. Here’s the thing: you hate being lied to, she hates being lied to. How would you feel if she sugar coated things with you for however long until she found just the right way to break up with you? Not great, I’d assume.

1) Most people avoid initiating breakups so that they don’t have to look like “the bad guy” and generally can make excuses for their doing so.

2) Lots of people press the issue until the OTHER person does it for them, thereby maintaining a false illusion that they weren’t to blame.

3) Generally (in bad breakups), someone is always the victim/villain.

4) Unless you’re socially awkward or a sociopath, no one likes to do it.

5) People put off what they see to do, and the result is the misery of not only them, but the other person.

6) People are not as oblivious as we think (in some cases).

7) YOU are 100 percent responsible for the relationship you’re in, regardless of what people tell you. (The 50/50 thing leaves room for expectation, which leads to upset. I’m not saying that both people aren’t responsible, they are: 100 percent).

If you want out, get out. If you don’t, then communicate and take responsibility. If mentally well, no one wants to be with someone who doesn’t want to be with them. Do you both a favor and end it now as amicably as you possibly can. Don’t blame her, don’t make her wrong. Just end it. THEN STAND WITH YOUR CONVICTIONS! I cannot tell you how many times guys break up with girls (or vice versa) and give the other one false hope by wanting to not feel bad, or avoid getting upset. Seriously, if it’s over, let it be over. If it’s not, don’t end it. Simple.