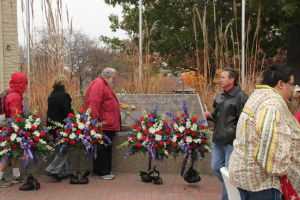 Despite the incoming cold weather, students, faculty and members of the public gathered around the Vietnam memorial Monday for a Veterans Day ceremony held at Washburn University to honor those who have sacrificed and those who continue to serve. This is the 26th year Washburn has held this event.

The Vietnam Memorial, which was first dedicated Nov. 11, 1988, is located at the southeast corner of Morgan Hall and lists the names of Washburn students who died during the Vietnam War.

A pre-ceremony included a cleansing and blessing of the memorial site by the Standing Bear Intertribal Brotherhood as well as the release of an orange balloon in memory of Agent Orange victims of the Vietnam War.

Topeka High JROTC members also passed out orange carnations to members of the audience to be laid upon the memorial.

Besides the band, the sounds of the ceremony included tolling of the bells, Taps with Echo by Jay Stevenson and Shirley Jacobson, bagpipes by Pipe Sergeant Steve Denny, and a prayer song by the Standing Bear Intertribal Brotherhood.

The invocation and benediction was given by Kansas Army National Guard Chaplain (Major) John Potter.

Jeanne Kessler, director of Student Services presented the initial greeting as well as a Veteran Tribute where she read the name of Washburn students who have or are still serving, as well as others from the community. She attempted to hold back emotions as she read her last tribute.

“Currently serving in the navy on the George Washington ship based in Japan is our son Austin Everheart,” said Kessler. “It’s been two years since we last saw you. Love mom, Linda Everheart.”

Meredith Kidd, Washburn dean of students, provided the welcome. He smiled as he proudly put on an army cap.

“It may look funny for the cameras. It may not match and it may clash, but I’m a veteran,” said Kidd.

Peck related the story of his father-in-law, a World War veteran he has known for over 30 years. He said he moved in with his father-in-law about a year and a half ago and has learned more in that time about his experiences then all the years before.

After the ceremony everyone was invited to a reception held in the Memorial Union which included an exhibit by the Combat Air Museum. A POW/MIA table set up in memory of prisoners of war and those missing in action was also available to view.

General Peck attended the reception and took the time to listen to veterans speak about their experiences and sacrifices. He explained how important it is to say thank you to veterans and to get the rest of their story.

“Because you don’t get it unless you stand and talk to them a little bit. They gave a lot of time to our nation,” Peck said. “We could give a little time to them and find out what their story is.”

And that’s just what they did. Several veterans attending the reception visited with fellow veterans and students alike, sharing experiences that helped shape who they are today.

“The key is that as we get them back into our communities. We welcome them back, find out what their perspectives are, and then not only support what they are doing but have them contribute to the community,” said Peck.