“Write” on with NaNoWriMo 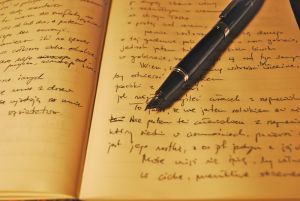 In 1999, freelance writer Chris Baty, and 20 participants, spent the month of July encouraging each other from start to finish in creating a 50,000-word novel in one month. A year later, the project moved to November and was dubbed NaNoWriMo (National Novel Writing Month) and became a non-profit event that people from all over can participate in.

NaNoWriMo encourages people of all ages to write at least 1,667 words every day in the month of November in the hopes that by Nov. 30 they will have a 50,000-word novel.

The novel can be about anything and can include any genre from fan fiction to science fiction to romance. The goal is to get anyone who has ever thought about writing a book (whether they think they are good at it or not) to achieve that goal.

NaNoWriMo has cultivated communities as all over the world with their programs. The Topeka and Shawnee County Public Library has been involved with NaNoWriMo since 2004 and the Topeka chapter has over 500 participants online. They had their 2013 NaNoWriMo kickoff event Oct. 28 and had a turnout of about 50 people.

Lissa Staley, a librarian at the TSCPL and the NaNoWriMo local municipal liaison, has participated in NaNoWriMo for the past 10 years and has won each year successfully completing 10 novels. She says that NaNoWriMo is a great venture for Washburn students.

“NaNoWriMo is a great thing to do when you are already busy, if you make time to adding and advancing to your story just one more thing you are doing every day in an already busy life, it takes you to this happy creative place of meeting a deadline,” said Staley.

NaNoWriMo expresses the importance of quantity over quality. The staff believes that the first draft is a chance for the writer to just write down ideas and let creativity flow and if one chooses to rewrite, the second draft gives a chance to express those ideas more articulately.

Participants don’t have to be a writing major to take part in NaNoWriMo.

“Anyone can be a writer. If you have read a book, you know what a book is and you can write one,” said Staley.

Margeaux Seymour, a senior psychology major has yet to try NaNoWriMo but wants to do so in the future.

“I write fiction and fan fiction. I did a writing group in high school,” Seymour said. “Now, I just share a lot on my Tumblr blog and fanfiction.net.”

If you are interested in joining NaNoWriMo check out NaNoWriMo.org. The Topeka chapter has events throughout November. The events consist of Write-Ins, where socialization is minimal and writers are encouraged to just write and caffeinate chats where writers meet, have coffee and socialize before heading off to go write elsewhere.