Recently added to Netflix “21 and Over” 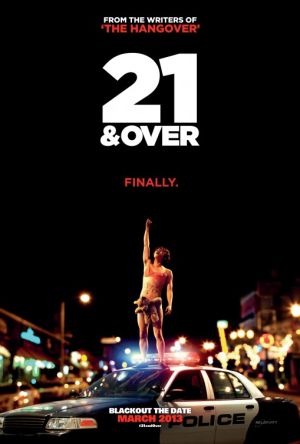 Recently, I was searching for a comedy movie on Netflix and came across a movie just released to Netflix earlier this year called “21 and Over.” It is about a kid named Jeff Chang (Justin Chon) who is getting ready for a big medical school interview the next morning, but nothing goes according to plan. His two buddies from high school, Casey and Miller (played by Skylar Astin and Miles Teller), surprise Jeff with a visit because it is his 21st birthday. Once the night starts, the fun and jokes begin.

One thing I liked was that the college campus they were on had a rustic look to it. Something else I liked was the fact that the actors had great out fits. The acting and the script were okay. I will say that some of their lines have been used way too much in other movies and some were simply racist. However, the movie was still funny at times, especially when Miller was trying to put “rational thoughts” into Jeff’s head when Jeff is drunk. This part was funny because none of these “rational thoughts” actually made sense.

Overall, I was not that impressed by the acting in the movie. Most of the lines felt overdone and the actors also did not do a convincing job of playing off each other to tell a great story. This was particularly noticeable in one scene at the bar where the friends meet a girl that knows Jeff and Casey is trying to talk to her. Jeff and Miller try to tease Casey by dissing him to the girl. Once the argument was over, they shared a laugh and moved on. Overall, the scene felt very fake.

I also think they could have done a better job with the music in the movie. What I mean by this is that there was a specific scene where the friends meet Jeff’s overbearing father and the music that was playing did not seem to fit with the intensity that Jeff’s father was providing.

I also did not like the lighting because in the night shots there was no low lighting in the scenes to help the viewer grasp how tense the situation was.

Most Netflix users give “21 and Over” 5 out of 5 stars, but I would have to disagree with them and give it 3 out of 5 stars. The reason why is because the movie seems to be a repeat of other similar movies that were better.

If this movie peeks your interest then I suggest you check it out, but I would recommend similar movies like “Hangover 2”, “The Change Up” and “Accepted.”