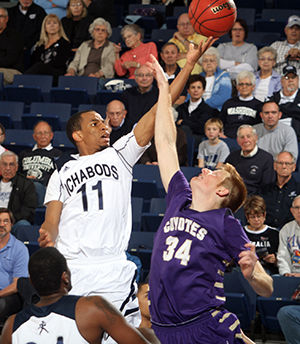 Kansas Wesleyan’s Joey Long fired the opening salvoes of the game Monday night at Lee Arena on two straight threes from nearly the same spot on the floor. After that, things didn’t go so smoothly.

The Ichabods quickly relinquished their 6-0 lead with a 13-2 run of their own, capped off by a monster dunk from junior guard Kyle Wiggins after he stole the inbounds pass from sophomore guard Dylan Hidalgo. The Ichabods’ leading scorer at 15 points per game, junior forward Alex North, scored eight points in the opening 10 minutes of the game and played an instrumental part in getting the lead back early.

The surprise of the first half was junior guard Jeff Reid. The former Mr. Kansas Basketball sat out last season while attending classes at Washburn has had a solid season until now averaging seven points and 7.7 rebounds per game, but he eclipsed those seven points in just ten minutes on Monday. He ended the half as the team’s second leading scorer with 10 points, but the most exciting play of the entire game was a play he wasn’t awarded points for.

After a miss from Wiggins, he jammed a two-handed put back dunk over two defenders, but was charged with a technical foul for hanging on the rim, discounting the basket, much to the crowd’s dismay.

The Coyotes shot incredibly well from the field in the first half, particularly from deep. They shot 48 percent from the field and 54 percent from deep, making seven of their 13 attempts from downtown. The Ichabods weren’t as successful on their three-point attempts, just four of 12, but made up for it on the break, forcing 12 turnovers and scoring 15 fast break points and 23 points off turnovers.

They made 58 percent of their shots in the first half and took good care of the ball, with only three turnovers in the first 20 minutes of play giving them a 62-47 lead. Wiggins led the team in scoring with 14 and North and junior center Stephon Drane both added eight. North also led the team in assists with six.

The second half started, much the same as the first half as the Coyotes jumped out to a quick start and kept the shootout going. A 7-2 run narrowed Washburn’s lead to three minutes into the half, but yet again North revived the offense with five straight points on a lay-up and a trey to push their lead back to 15.

With 12 minutes remaining in the half a circus lay-up by junior guard Korey Fisher on an isolation play gave him an and-one attempt and the made free-throw momentarily gave the Bods their first 20 point lead of the game at 83-63. That didn’t last long though as two straight lay-ups from the Coyotes put the game back within 16.

With just under six minutes remaining in the game, another big dunk from Wiggins after one of his game-high four steals stretched the Bods lead to 21. Back-to-back threes from junior forward Christian Ulsaker and freshman guard Andy Wilson got them into triple digits and the Coyotes found themselves down 102-75.

The Ichabods are a much smaller team this season with just one player over 6’ 6”, but they put their athleticism on display on Monday night. Five dunks and 17 fast break points later, Washburn got their fourth win of the season, winning 107-81, to advance to 4-0 on the season.

The team showed that size didn’t matter as much as their critics may have thought, as they were able to score 56 of their 107 points in the paint. Wiggins led all scorers with 18, one away from his season high. Drane added 16 and North had another good all-around game. He scored 13 and led the team in assists and rebounds with seven and six respectively.

The Ichabods take the floor next at Lee Arena as they take on Rockhurst University at 7 p.m. Thursday.