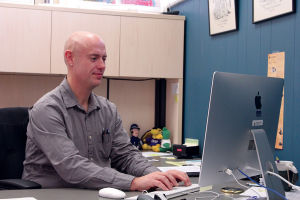 Washburn University has a new campus Union Director. Steve Zywicki has taken on the job of overseeing the union building. He is originally from Green Bay, Wisconsin, where his former campus, the University of Wisconsin, is located.

Zywicki graduated from the University of Wisconsin, Stevens Point with a degree in communications. After graduation, Zywicki worked a variety of temporary positions at UW, Stevens Point. Several months later he was able to land full time employment with the UW, Stevens Point in the conference and reservations office. His job duties included planning summer camps and handling reservation needs and support for the campus. He worked there for about three years.

Zywicki was then given the opportunity to work in the facility’s alumni affairs office as a fill-in during restructuring. While he was well aware that the position would not be permanent, he was fascinated by the opportunity to do something new. Zywicki worked in alumni affairs for four years. Since that was where he graduated, Zywiki enjoyed working with the alumni. As much as he liked the job, Zywicki really missed being involved in the student life and development. When he knew that his contract would soon be up, he started looking for something new and found a job at the University of Wisconsin, Green Bay.

Zywicki worked at the University of Wisconsin, Green Bay doing reservations and event support. There, he was able to work with students and do a job he loved.

After performing the duties of this job for over seven years he felt that it was either time to move up or move on. The University of Wisconsin, Green Bay didn’t have anything that really interested him. He started looking again, which is when he found the job at Washburn University. He felt like it was a great opportunity and jumped at it.

Zywicki is new to Topeka, but so far he enjoys it. Zywicki said he thinks he will enjoy the atmosphere at Washburn. There was no football team at his former campus, which he really missed. He also missed having a strong atmosphere of school spirit that he has noticed at Washburn.

Zywicki encourages students to come to him with any ideas or concerns about the campus union building.

“I want students to feel like the union is a great place to hang out,” said Zywicki.