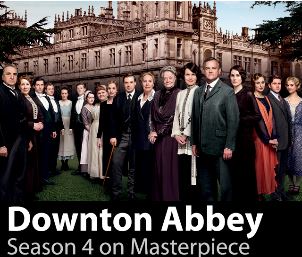 Season four of "Downton Abbey" will have its première Jan. 5. KTWU is having a tea event 3:30 p.m. Dec. 15 at the Topeka Country Club to showcase the premiere episode of season four of “Downton Abbey.”

KTWU will hold the “Downton Abbey” Tea at 3:30 p.m. Dec. 15 at the Topeka Country Club to showcase the premiere episode of season four of “Downton Abbey.”

The event, which began last year, will have many activities, including high tea, guest speakers, a Ralph Lauren fashion show and a preview of the first hour of season four of “Downton Abbey,” which will begin Jan. 5 on PBS.

The tea, which will include drinks, sandwiches and treats, will be modeled off of the style of the ‘20s and ‘30s represented on the television show. Dillard’s will also provide a fashion show consisting of the Ralph Lauren clothing line. Guest speaker, Bob Keckeisen, will speak about the architecture of the set in “Downton Abbey.” Guests are encouraged to wear period costume.

“We are going to get as close to the real thing as we can get,” said Betty Lou Pardue, assistant director of development at KTWU. “We are making sure everything is perfect this year to be exactly how they do it on the show.”

Although the majority of the events audience will be from Topeka, many from the Kansas City metropolitan area, the Manhattan area and from several surrounding states will be in attendance. Last year, the event held over 150 guests. That number is expected to rise this year.

“We have 100 guests so far who have bought tickets,” said Pardue. “This year, there should be upwards of 200 people at the party.”

“Downton Abbey,” which has trumped ratings in all time slots in the last few seasons, is highly anticipated by viewers this season as the show’s plot unfolds.

“Last year, as soon as the music started playing and the opening titles popped on the screen, all the guests clapped and cheered,” said Pardue. “It was exhilarating to see all the excitement in the room.”

Guests can expect party favors that include tea bags and other theme related gifts, along with the opportunity to win prizes throughout the evening, such as “Downton Abbey” calendars, books and DVD’s.

A free screening of the first hour of season four will be Dec. 16 at the KTWU studios.