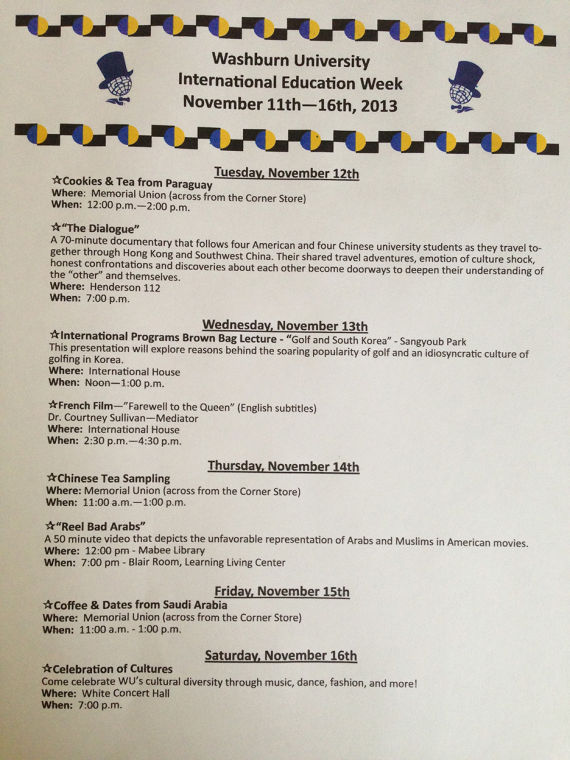 “We realize that it is important to celebrate this on campus and to help the campus be aware of not just the different things we do but the importance of international education in its different forms,” said Heidi Staerkel, Washburn’s international student services coordinator.

Three of the events will take place in the Memorial Union; “Cookies & Tea from Paraguay” on Tuesday from noon to  2 p.m., “Chinese Tea Sampling” from 11 a.m. to 1 p.m. on Thursday and “Coffee & Dates from Saudi Arabia” on Friday from 11 a.m. to 1 p.m. Paraguay, China and Saudi Arabia are the three largest international student groups at Washburn. There will be information tables set up at each of the events and the international students will talk with faculty, and staff and other students about their home countries.

“There will be cultural displays, pictures, activities and lots of information,” said Tina Williams, study abroad coordinator. “I know the Chinese students are going to show how to use chopsticks.”

“It helps us to understand each other and accept each other more,” said Alfaour.

Five other events are also being held throughout the week. A documentary titled “The Dialogue” will be shown at 7 p.m., Tuesday in Henderson 112. The film educates viewers on the importance of understanding cultural and communication differences by following the experiences of American and Chinese students as they travel together.

A video about negative stereotypes many Americans have against Arabs and Muslims, “Reel Bad Arabs,” will be shown on Thursday at both noon in Mabee Library and 7 p.m. in the Blair Room of the Living Learning Center.

The final event will be “Celebration of Cultures” on Saturday at 7 p.m. in White Concert Hall where Washburn students will showcase many aspects of cultural diversity through performances in areas such as music, dance, art and fashion.

“This world is so big. People you meet might have other roots elsewhere,” said Teresa Chui, fifth-year senior who is double majoring in biology and chemistry. “Take advantage. One thing that I think is always growing is thoughts and ideas. You can share thoughts and ideas and make connections with people from around the world.” Chui studied abroad in South Korea during the spring 2013 semester.

The International House is not only highly involved with both international students that come to Washburn and Washburn students that choose to study abroad, but they also offer many other programs in areas such as community outreach. For example, English for the Foreign Born (EFB) is a class that takes place on Tuesdays and Thursdays where volunteers teach the English language to members of the Topeka community.

Sally Bender, International House administrative assistant, said that next year their goal is to open the week to all departments on Washburn’s campus with the hopes of achieving a more well-rounded and all-encompassing representation of cultural diversity.

“We just want to take advantage of this week and celebrate international education,” said Williams.