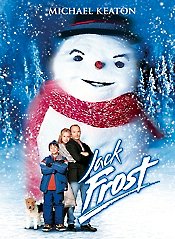 Keeping with the Holiday spirit is another holiday movie that families will enjoy. The movie is called “Jack Frost” and is now available on Netflix. It is about a father who is passionate about his band, but when it comes to his son he can not keep his promises to him. He unexpectedly dies in a car accident but comes back as a snowman where he has a chance to make up for things.

The actors make the story believable by showing raw emotions when needed. This is eminent when a year has passed since the father died and his son Charlie Frost, played by Joseph Cross, must deal with his feelings. The scene has Charlie shoveling the driveway and when he almost has it done a snowplow comes by covering the driveway. Charlie looks down at  sees the name of his dad band on the shovel then continues to shovel the driveway angrily.

His mom Gabby Frost, played by Kelly Preston, comes home and tells Charlie not to worry that she can just drive through it but Charlie says “No mom,” and starts to cry.  She gets out of the car to hug him and tell him its okay. The display of emotions was believable to me because when a loved one is not there anymore it effects the remaining family members greatly, especially on the holidays.

I also like the reaction Charlie has when he hears the voice of his dad, “Jack Frost” played by  Michael Keaton, runs and hides because he is in shock that a snowman is talking to him. I could tell their was great chemistry between Charlie and Jack. There was this one scene where they are on a frozen pond and Jack wants to teach his son the ‘J’ shot to improve his hockey game and Jack keeps bugging Charlie to play until his son finally says ‘okay.’

I also like the fact how the music for different scenes really helps to enhance the expressions of the actors. For example, the music is fitting for the scene where Charlie and his dad are being chased by a bunch of kids  they started a snowball fight with. While going down the hill sledding they must watch out for all  the tress and rocks as they are being chased. This scene just made me feel like a kid again.

This is just a fun movie for the whole family to watch. I would have to give 5 out of 5 rating for this movie because it will remind us all to keep family members in our hearts.