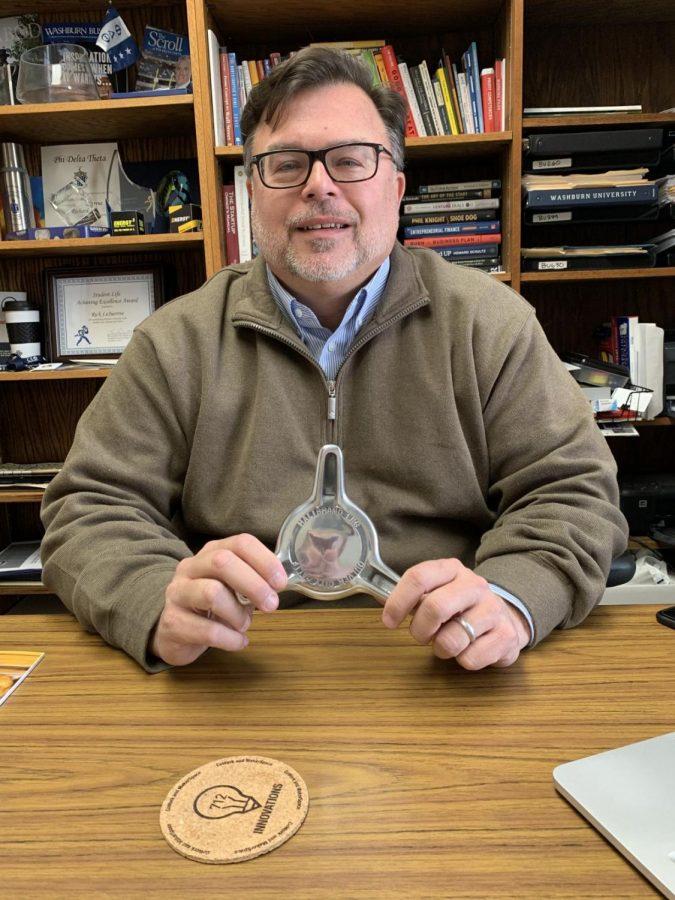 Reinvent the wheel: LeJuerrne shows off an original Halibrand wingnut. In the movie “Ford vs. Ferrari,” there is one particular scene that felt surreal to LeJuerrne: a Halibrand wingnut being whacked onto the axle of the GT40 race car with a rubber mallet to keep the wheel in place.

Regardless, there are Washburn professors who obtained a large amount of real-world experience before entering the world of upper-level academia. Rick LeJuerrne, a lecturer in the School of Business, is just one example.

LeJuerrne graduated from Washburn with an accounting degree in 1991. After working for a few different companies, he joined his father’s business, Halibrand Performance, formerly known as Halibrand Engineering.

The business has a long history that uniquely ties to the recent blockbuster film “Ford vs. Ferrari.”

“He’s credited as the first person to make the magnesium wheel, or the ‘mag wheel,’” said LeJuerrne. “He put them on his cars and would lap opponents because being lighter was such an advantage.”

Then, race car designers such as Carroll Shelby, the inventor of the GT40 and main protagonist of “Ford vs. Ferrari,” got wind of this reinvention of the wheel.

“Halibrand was the company that was known for going fast. “Ted Halibrand built a company that at one point had wheels and components on 20 straight Indy 500 winners,” said LeJuerrne

Ted Halibrand eventually sold the company, and after multiple ownership swaps, LeJuerrne’s father purchased the company and brought it to Wichita in 1993.

The company stood for multiple decades until this past year when the owner, LeJuerrne’s father, passed away and the family decided to sell the company to Holley Performance Products.

LeJuerrne originally worked at Washburn from 2003 to 2011 as the director of the Small Business and Development Center. Here, LeJuerrne used the experience and knowledge he gained from Halibrand to help entrepreneurs and business developers in Topeka.

“I got to work with entrepreneurs that had great ideas and saw some businesses go from an idea to actual businesses that are around Topeka and northeast Kansas today,” said LeJuerrne.

LeJuerrne is now a full-time lecturer in the School of Business and helped develop the entrepreneurship and innovation concentration for the school.

He uses his business experience in the classroom often.

“I’ve got all these experiences from Halibrand and other things that I can draw from to give advice, but I don’t have all the answers,” said LeJuerrne.

“In a class that I took with him, he used a lot of examples from his experience at Halibrand,” said Keller. “I remember him telling us about a large order being placed and it was either coming or going to Mexico. He mentioned how he had so many struggles and it ended up costing the company a bunch of money.”

While LeJuerrne’s students believe that he has all the answers, the man himself promises that most answers can be found using three key things.

“The key is, as an entrepreneur, you must believe in yourself. And if you run into a challenge, you have to hustle and figure it out. It comes down to hustle, grit and determination,” said LeJuerrne.