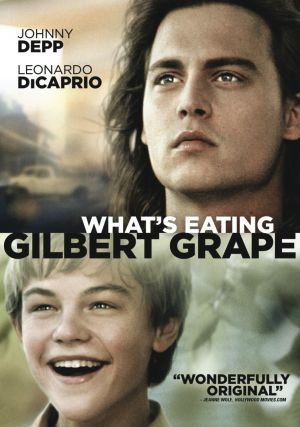 Leonardo DiCaprio has become a household name in America, known for his role as Jack Dawson in “Titanic,” and his more recent performances in “The Great Gatsby,” “Inception,” and “The Wolf of Wall Street.”  But before any of that, 19-year-old DiCaprio gave his breakout (but not debut) performance as Arnie Grape in the 1993 film “What’s Eating Gilbert Grape.”

The film tells the story of Gilbert Grape who is lost in the small town he was born and raised in, caring for his autistic younger brother, Arnie, and his obese mother, who was once the belle of the town but has now become a recluse and a joke

Gilbert’s world is thrown into turmoil when love wanders into his life in the form of Becky, a gypsy travelling with her grandmother. The role of Gilbert Grape is brought to life by none other than Johnny Depp, who has also reached stellar points of popularity among movie viewers.

To be perfectly honest, I’ve watched this movie dozens of times, and the only mistake I’ve ever noticed (and I make a hobby out of discovering mistakes in movies and books) is that at the beginning, Gilbert says that his dad was “hung out to dry 17 years ago.” The youngest child, Ellen, is 15-going-on-16. Supposedly their mother, Bonnie, spiraled into depression after his death. No mention is made of Ellen having a different father than the other children. Maybe it’s a mistake on the part of the film makers, or maybe Bonnie went out in depression and had a fling to help herself feel better.  Either way, it’s a questionable point.

In my opinion, this is one of DiCaprio’s finest performances. It would seem critics agree with me because he won a CFCA Award for Most Promising Actor, and an NBR Award for the same title. It takes a gift to convincingly play a character with mental disabilities, but I would rank his performance right up there with Dustin Hoffman in “Rain Man” or Cuba Gooding Jr. in “Radio.”

The slight speech impediment, the incessant parroting of random phrases, and the inability to cope with conflict which characterize a person with mental disabilities in Hollywood are all very vivid in DiCaprio’s performance.  Add to that the fact that he looks more like a 12-year-old than a 19-year-old, and it really makes me wonder why DiCaprio is still waiting for an Oscar 20 years later, especially when his performance as Arnie earned him a nomination for a Best Supporting Actor. Perhaps 2014 will be his year, as the now 39-year-old has been nominated for Best Actor for his role in The Wolf of Wall Street.

Johnny Depp, in contrast, has had his first Razzie nomination for his role of Tonto in Disney’s The Lone Ranger. For those of you who don’t know what a Razzie is (and don’t be embarrassed because I didn’t either) it is the opposite of an Oscar.  The Oscars recognize and celebrate the Best of the Best performances, Razzies recognize (or make fun of; whichever way you want to look at it) the Worst of the Worst performances.  While Depp’s role as Gilbert Grape did not earn him a Razzie (nor would I have nominated him for one), it also did not win him an Oscar (which I also would not have nominated him for).

I will admit that Depp brings that subtle style that really makes you believe his performance, the fact remains that Gilbert is a one-dimensional character. The audience knows exactly how he will act and react in every situation because of how he has acted in the rest of the movie. Naturally a huge part of the plot is him changing into a three-dimensional character, but it takes around 100 minutes of a 120 minute movie for him to do so.

On an interesting side note, according to the Internet Movie Database, “Johnny Depp wanted to play Gilbert as someone who seems constantly half asleep/half awake. Someone who is numb to the peculiarities in his life.  Juliette Lewis [who played his love interest Becky] completely agreed with his interpretation of the character.  Even still, Depp worried he was boring by playing Gilbert so mildly. Lasse Hallstrom [one of the executive producers] however agreed with Lewis, and thought that Depp nailed the part.” So Depp and I would have had some interesting conversations about how he should portray Gilbert I think. However, I would agree with Lewis and Hallstrom that overall he did “nail the part.”

Overall the movie is a quirky, heart-touching story with a touch of drama and a taste of romance. Just to be clear, by romance I mean actual falling in love, not steamy sex scenes. It’s a testament to the creators of the film that they managed to create a love story with no sex, which movies are full of these days. Depp and DiCaprio fans will enjoy it, if not for the plot, than simply for being able to see how far their favorite actors have come in their careers. I have to give this movie four out of five stars, despite how much I love it. Without giving too much away, I will say I docked the star for the ending.

Even though all of the characters end up in a place that the audience will agree is good for them, it’s not a traditional “happily ever after,” which most of us look for in movies.