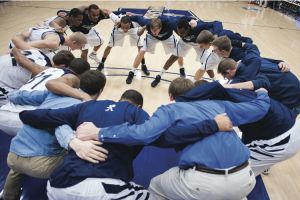 The Washburn men’s basketball team started out the season strong with a 8-0 start. Since conference play has started, the team has only lost three games, including a close game with Northwest Missouri State University, who is now the leader in the MIAA conference standings. The Bods are now 5-3 in the conference and 12-3 overall.

“Well you always want to win every game, but we have a new group,” said head coach Bob Chipman. “We are off to a pretty good start, kind of in position to make a challenge for conference championship.”

Chipman says his team has to really get better here in the next month in order to catch up with the top three teams in the conference. He believes that his team will become more consistent by playing more games on a regular basis.

“This schedule has been so strange,” said Chipman. “Since Nov. 27 up until now we have played six games. That means there have been too many practices and not enough games. We just got to get back in the flow of a schedule playing a couple games a week.”

The Ichabods won their last game against the Pittsburg State Gorillas. The Bods had to battle the entire game after the first 10 minutes of the first half. However, the last three minutes the Bods played smart, and they regained the lead with a three-pointer from junior guard Korey Fisher in the last 49 seconds of the game.

“We just need to keep getting better and we need to learn from our mistakes and I think we are doing that thus far this year,” said junior forward Alex North.

With the Bods off to a good start, Chipman has high hopes for the rest of the season.

“Expectations are still high. Win a championship, but more than that, just try to get better and keep this group improving.”

The Men’s basketball team will take on the University of Central Oklahoma Bronchos at 7:30 p.m. Thursday at Lee Arena followed by another home game against Northeastern State University at 7 p.m. Saturday.

Junior guard Kyle Wiggins is the only returning player, and the one with the most playing time last season. The rest of the players are fairly new. Chipman says that every game is like a new experience for them. He also says that he is still trying to find the right line-ups for his team and that fans should stay behind them.

“We got an exciting group, a local group. We have great kids that are trying really hard. We are excited to play.”