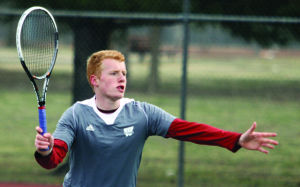 The Washburn men’s tennis team is starting off the season on a high note as they are ranked No. 31 in the nation. They are also ranked second in the MIAA Preseason Coaches Poll behind Northwest Missouri State University.

“This is the year that we need to be good. You know you work three years to get to this point and these guys have put in a lot of time and effort,” said head coach Dave Alden.

Last season the Ichabods went 13-8 overall and 5-1 in the MIAA conference play. The men also made it to the first round of the NCAA Tournament.

“We finished third regionally and last year you know we were second in the conference regular season and then we lost to Southwest Baptist University in the semi-finals of the conference tournament. We’d beaten SBU a week and half earlier,” said Alden.

The wind and the cold have prevented the Bods from practicing outside on the Washburn courts. Luckily for the Ichabods, the team has a place to practice despite the weather.

“We are fortunate in the fact that we have access to Wood Valley,” said Alden. “That’s where we practice and all of our matches will be inside until the Ouachita match at the end of February. We are playing that one down in Oklahoma and we are hoping it will be a little warmer. But with this weather and the wind, it’s ridiculous. You can’t get a whole lot done, but we get to play inside.”

This year’s team consists of nine players. Four of the players are seniors, two of the players are juniors, one sophomore and the rest are freshmen. The four seniors this year are Steven Fletcher, Bobby Florence, Chance Joost and Arek Kozaczuk who will be leading the team. The expectations are high for this older group of men.

“I would be ecstatic to see us, at the very least, finally win our conference and make the NCAA round of 16, which we will certainly be striving for,” said Fletcher.

“There’s three teams that are very close and our job is to go out there and see if we can beat those guys and win conference,” said Alden. “We have a good men’s team. We’re deep and experienced. These guys have worked awfully hard in the off season.”

In March, there will be four home matches in a row. Three out of the four will be non-conference games; however, the Bods will take on Emporia State University as their first conference for the season.

“My hope is to make some truly unforgettable memories with teammates who have grown to my life friends, but being the competitor I am, those memories better include victories rather than defeats,” said Fletcher.