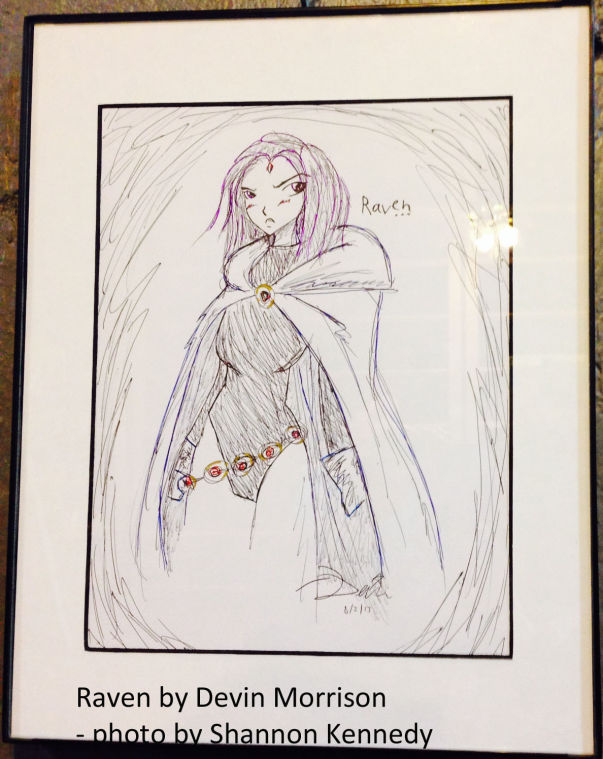 For local artists that are interested in the sci-fi or comic book genres, the gallery opened the competition in December, outlining the judging, time frame and entry requirements. There are separate group categories for entries, 17 and younger and 18 and older.

The entries will be judged on Best in Show and Viewers Choice in each of the categories. One lucky winner will receive a free ticket to Comic-Con in Kansas City, Kan. during March.

“We worked for months to get this set up,” said Morrison. “We were really surprised by the interest of local artists and feel that this is something that will continue to grow over the years.”

Robert Brown, director with KSNT and Deon Griffith, owner of The Gatekeeper, a comic book and hobby store in Topeka, Kan. were chosen to decide Best in Show.

There were 15 entries this year that ran the gambit of paintings and mixed media. Of those 15 entries, two are Morrison’s daughters. Devin Morrison and Gilian Morrison represent both categories in the event. Devin is a sophomore art major at Washburn University and Gilian was the only under 17 entry in the show. Another artist that entered the event is local published graphic novelist, Eliza Frye.

Gilian entered her mixed media of her interpretation of several super heroes.

“I feel like this is going to be an event that is going to take off,” said Gilian. “And with this space, it’s a great location too.”

While the show opened on Jan. 18 and the guest judges were to decide on the Best in Show for each category, the Viewers Choice is be decided by people that visit the gallery between Jan. 18 and First Friday in NOTO, Feb. 7.

aMUSEd is situated in a building off the main drag in the NOTO art district of Topeka, Kan. but not so far off that it is not worth the walk.

The gallery offers parking and will be going through some major changes in the coming months. What used to be a cabinet and flooring design center may be transforming into a microbrewery.

Morrison works in the gallery, not only as the owner but as an artist.

“I moved my studio to this location,” said Morrison. “Because my current studio allows me three seasons but in the cold, I can’t do much.”

All art is for sale and prices are marked on each piece.