The end of cursive? 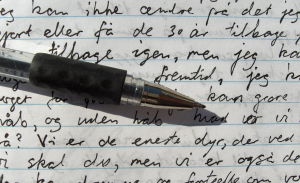 Cursive handwriting is becoming obsolete thanks to technology and the increased trend toward going paperless according to the Common Core Standards Initiative for schools.   Common Core was adopted by 45 states as a standard measurement of the knowledge and skills required to complete K-12 education.  But the Kansas State Board of Education is one of the few states to have decided to keep cursive writing on the curriculum.  At least for now.

“We know that people still do use cursive writing as a method of communication,” said Kris Shaw of the Kansas Board of Education.

But across the country and in Canada, keyboarding is now seen as more important in this era of electronic signatures and iPad note-taking in the classroom.  Students are no longer assessed for higher learning in handwriting or penmanship, as keyboarding is the necessary skill needed to enter college and the workforce.

The Common Core State Standards Initiative website states this is “a state-led effort organized by the National Governors Association Center for Best Practices and the Council of Chief State School Officers.  In collaboration with teachers, school administrators, and experts, to build a guide to prepare schoolchildren for college and the workforce.  Students and those with disabilities were also interviewed and a majority deemed cursive writing impractical.”

But studies on the subject have shown that test subjects who used cursive did better on tests as writing in cursive is beneficial to hand-eye coordination and cognitive motor skill development. When learners are keyboarding they do not have to think about what they’re writing before they write it.  It is not necessary to think about how to create the letters, because it is already done for them. Cursive writers must think more.

For those whose handwriting skills are more like chicken scratch, this can mean relief from a lot of hard work.  But some educator’s feel students need to learn better penmanship because too many are forgetting how to spell, instead using the ease of spell checkers.  They are also getting used to texting things like “bff,” “tmi” and “u r” and not learning to spell out words through the kind of repetition writing teaches.

Amy Laney, an English Language Arts Facilitator in Tyler, Texas, said  “So many of our primary source documents, for example the Constitution, and the Declaration of independence are written in cursive so we cannot let it be a dying art.”

The young children of today and in the future will, at times, need to be able to decipher the script written by a large part of the population, but it will probably be with the help of an iPad app.

Both teachers and schoolchildren have weighed in and a majority feels cursive writing will become a thing of the past. Like calligraphy, it may become the subject of nostalgia — the primitive lost art of script, going the way of the pay telephone, maps, the tollbooth worker and playing outdoors.

Some of those who oppose dropping cursive writing wonder whether its loss will really be a positive step forward.  If there ever is an apocalyptic loss in electrical power, maybe those who have not learned to sign their name will just have to sign on the line with an X.