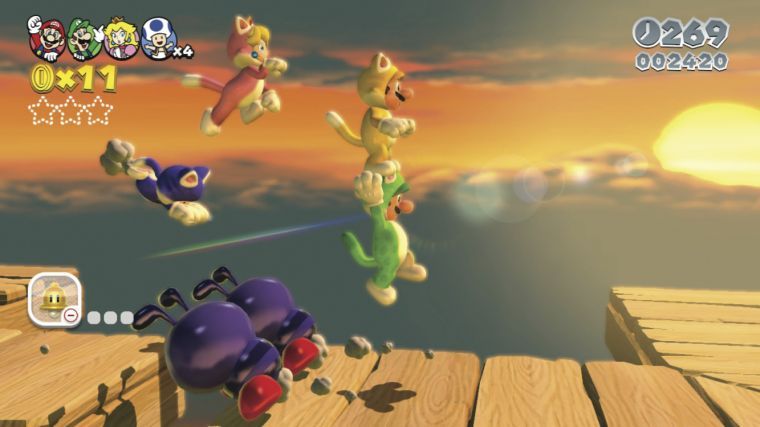 The difficulty of Super Mario 3D World also deserves a mention because while it does start off easy, the game ramps up the difficulty with each world, culminating in the hard unlockable worlds that become available in the post-game. These final worlds are no joke and often require dozens of lives to get to the goal.

I hear all you X-Box and Playstation fans out there claiming that if a game has bright colors and cheery music it must automatically be easy and childish. This isn’t the case though, and while it’s no change from Nintendo’s normal modus operandi, Super Mario 3D World’s brilliant colors and fun songs are still a refreshing change of pace from the brown and gray shooters that flood the other consoles.

The difficulty is also deserves a mention because while it does start off easy, the game ramps up the difficulty with each world, culminating in the hard unlockable worlds that become available in the post-game. These final worlds are no joke and often require dozens of lives to get to the goal.

Super Mario 3D World’s difficulty can be changed in a roundabout sort of way though, as certain characters have certain traits associated with them. Mario is even overall, Luigi jumps higher but has worse traction, Peach can hover in midair for a short time, Toad runs fast but has a very small jump, and a secret unlockable character has the slowest running speed but can double jump and attack with a spin move. Using the proper character in the proper level can make almost any level (excluding the post-game ones) a breeze, while using the wrong character can create quite a challenge. This is a great feature, especially in multiplayer, as it allows an experienced gamer to use a character less suited to the level which adds a challenge, while less experienced gamers can use a character more suited to the level, making it easier for them. This helps bridge that experienced/inexperienced gap and was particularly helpful when I played the game with my younger cousin.

The game looks and plays fantastic as well. Seeing the Mushroom Kindom in HD is a treat and the blending of elements from both sidescrolling 2D Mario action and Super Mario 64 style gameplay is a match made in heaven. New and old power ups are mixed as well. The game features old favorites like Fire Flower and Super Leaf, more recent additions such as the Mega Mushroom and Boomerang Suit. As well as new items like the Super Bell which turns you into a cat that can climb walls.

The music is fantastic as well. The main theme is peppy and fun to hum along to, but there are also levels where dark foreboding music echoes the shadowy level design. Some old favorites in the world of Mario music make a resurgence as well. Songs like “The Princess’s Secret Slide”, “Gusty Garden Galaxy” and the classic Super Mario Bros theme are back in full force, evoking fond memories of past games.