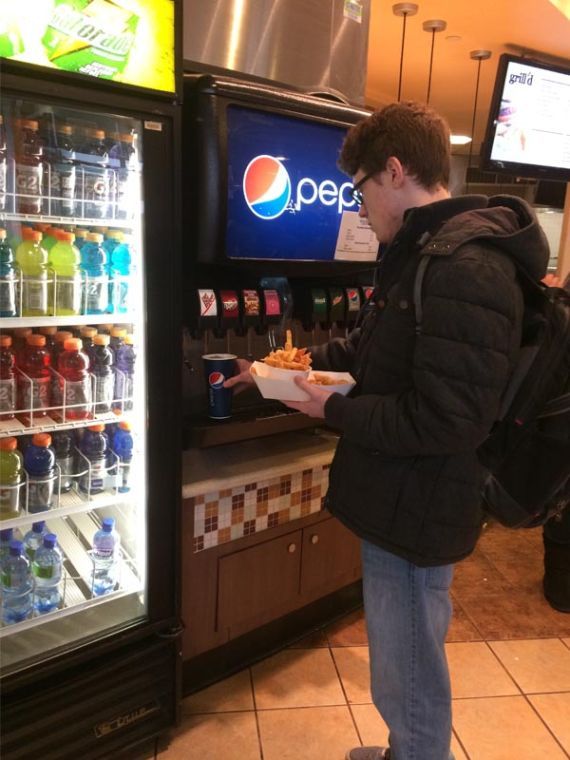 John Williams getting lunch in the Union's cafeteria. Passing up soda is not always an easy choice.

Ya Xu, [email protected], is a freshman english education major.

Kansas Action for Children (KAC) has launched a new statewide campaign to urge everyone to take the Soda-Free Sundays pledge and “Pass on Pop” every Sunday through 2014, in order to raise people’s awareness and make sure that all Kansas live healthy.

KAC believes that sugar-sweetened drinks, like soda, are full of empty calories.

“They can harm teeth and bones and contribute to weight gain. Besides, the fact that one in three Kansas kids and two in three adults are overweight or obese set up their mind to launch such a initiative,” KAC claimed on its website.

According to KAC, the reason why they chose Sunday is because “it is easier to start small by passing on pop (and other beverages made with added sugar) just one day a week. Sunday is a good day to make changes as a family or community.”

“I probably go through a 12-pack of soda every week. Giving up soda is not something I have thought of,” said John Williams, a freshman communications major.

When referred to the idea of “Go Soda-free on Sundays,” he added that he could probably stop drinking soda at least one day a week.

“The campaign could be good if it goes about the right way. It’s a pretty good idea,” said Williams.

“I probably have 16 ounce soda every week. I can give up drinking soda. But it would probably be easier to stop drinking soda one day a week,” said Will Kubie, a junior music education major.

“I think the campaign is great. Soda is not good for us. Everyone will look healthier if they stop drinking pop, that’s for sure,” added Kubie.

As for diet soda, KAC in its announcement mentioned that even diet soda could be bad for your health. The artificial sweeteners found in diet soda could make you crave sweet foods and ultimately consume more calories.

“Actually when I see people drinking tons of diet soda, it’s not really any better because they still have all the sugars and fats that come along with them,” said Williams.

KAC now is asking individuals, families, businesses and organizations to come together to skip soda and other sugar-sweetened beverages one day a week. They hope people will join them in building healthier communities so that all Kansans can live healthy productive lives.