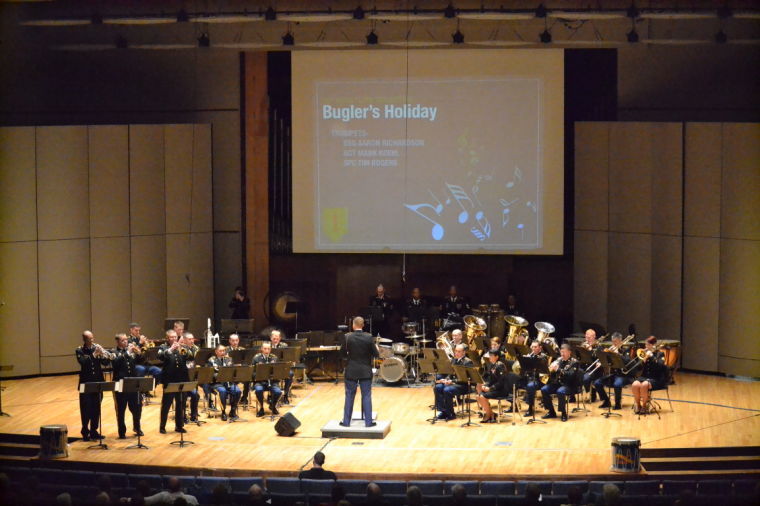 As part of its concert season, the association added a state-based performance this year by contacting the band in Ft. Riley. The original schedule for the season consisted of only five performances. The band was included as a bonus concert for the year.

“This was a nice way to bring in the New Year,” said Gary Johnson, president of the Topeka Community Concert Association.

Johnson’s board of directors was able to book the 1st Infantry Division Band because of their mission to serve the local communities.  The band has performed in other cities like Junction City, Manhattan, and Kansas City.

“This is our way of saying thanks to the serving Men and Women,” said Johnson. “Everyone loves marching bands.”

The army band displayed diversity in song choice throughout the performance.  They began with traditional songs like the “National Anthem”, “Home on the Range”, and “Amazing Grace”. The band then shifted into a vocal centered trail of songs.  The songs “Summertime” and “All of Me” introduced the vocal range of staff sergeant (SSG) Jennifer Champagne.

Intercut between the performances were video segments from the band members explaining why they performed in the 1st Infantry Division Band.

“The band allows us to span out with music,” said SSG Jason Ford.

The band even moved away from traditional band instruments as members brought out a keytar and bass guitar during their rock and medley version of the show. The medley featured famous songs of Motown which featured songs from artists like The Temptations, Jackson 5, and Bruno Mars.

Near the end of the performance the band urged everyone to salute the veterans in the audience with the song “Armed Forces on Parade”.

“I was surprised at how many soldiers were in the audience,” said Jeffrey Price, Chief Warrant Officer. “Songs like the National Anthem displayed our country’s National Musical Legacy.”

This is the 83rd season of the Topeka Community Concert Association, deeming themselves the oldest nonprofit organization in Topeka. The association will finish off the rest of the 2013-2014 season with performances from the Borealis Wind Quintet, Jesse Lynch Jazz 101 and Yang & Olivia Liu.

Subscription packages for tickets to the rest of the season will be $50 in total.  Washburn students can enter the concerts for free with their student identification cards.