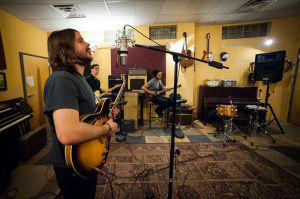 The local band Westerners takes a break from live shows to record their first EP at Element Recording Studios in Kansas City, the EP will consist of four original tracks of which the band has been developing since the past summer by playing local shows in Topeka, Lawrence, and Kansas City.

The sound produced is a high energy, alternative, indie-rock that is driven by Mitch Hewlett on guitar and lead vocals; Ben Childs guitar; Josh Hartranft on bass and vocals; and Matt Mirsch drums and vocals.

The name ‘Westerners’ was brought to life by Mitch Hewlitt.

Matt Mirsch, a 2012 Washburn music education graduate and drummer for the band described his views on the name as “We are Westerners, a product of western society.”

“I’ve always been largely influenced by Zeppelin,” said Mirsch. “Our singer Mitch is into bands like Dr. Dog, My Morning Jacket, and old Kings of Leon. We’ve also been listening to a lot of Deer Tick lately.” Mirsch continues describing the connection between the members of the band and musical influences. “Josh brings sort of a punk element to the band. I’m not certain on what all Ben listens to. We just recently added him to the band roster and he hasn’t been to enough band dinners to find out what all he listens to yet.”

Westerners began performing as a band around mid-summer of 2013 and have been devoting most of their time and money to their passion of music.

“We finally took February off to record the demo and kind of get our ducks in a row but winter has been a non-stop barrage of driving to gigs,” said Mirsch. “Those were mainly shows to help get us ready for recording in the studio.”

The date of the EP’s release is not yet known but Mirsch believes they should be finished recording with one more session of vocal harmonies and auxiliary percussion.

“We still need to sit down and discuss how we want to have the recordings pressed. We are thinking about possibly getting 500 hardcopies,” said Mirsch. “There’s also the idea of using QR codes with flyers and just handing them out like candy. It’s a quick way to get people directed to our site and then if they like our music they can follow us, see the dates of our shows, purchase the EP if they wish.”

You can find Westerners posting upcoming shows and status updates including photos of their cat Twinkie by visiting www.facebook.com/westernersmusic

“We’re hoping to get a van and start touring where we can learn to hate and love each other,” said Mirsch. “Once summer hits and the weather gets beautiful we will be playing a lot of shows.”