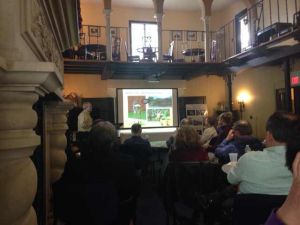 Nancy and Mike Tate spent two weeks in Zambia and South Africa. They traveled between late May to early June, which was actually late fall and early winter in South Africa, they gave a lecture named “Lions, and Leopards and Rhinos—Oh My” Feb. 19 at the International House.

South Africa, a country which has three capitals, is famous for animals and its speed-developing economy. South Africa has a lot of attractions, such as Blyle River Cayon, Kurger National Park and Cape of Good Hope.

An interesting experience the Tates had was with the animals in Kruger National Park.

“The time of year we chose to travel was suggested as one of the best seasons for animal sightings since the Kruger National Park area was in the dry, cool season,” said Nancy, an associate professor in computer science. “That meant the animals would congregate at watering holes and there was less foliage to hide them from view.”

South Africa has 11 official languages. Thousands of South Africans are multilingual. English is one of the official languages there, which is a benefit for a personal trip. Small groups may help people spend more time on watching the animals, rather than waiting on people.

“Most people’s goal is to sight ‘the big five’—lions, rhinoceros, water buffalos, leopards and elephants,” said Nancy. “We were lucky enough to sight the big five plus many, many more. It’s very exciting to view these wild animals in their natural environment as opposed to in a zoo. In fact, we were almost able to experience a pride of lions taking down a zebra, but the zebra was able to get away at the last minute.”

“We live in a global society and it is important that we broaden our horizons whenever possible, that’s why I gave this lecture,” said Nancy. “If at all possible, travel to another country.  It will be a transformative experience. “

Though students don’t always have time to go abroad, they can take part in these lectures.

“The diversity of wildlife, landform, languages and ethnicity were most impressive for me,” said Wang Pan, a senior communications major. “I learned something new from this lecture. Early immigrants brought different cultural traditions into this country, and interestingly South Africa keeps its culture as a ‘salad bowl.’”

This lecture is part of the Brown Bag International lecture Series. The lecture series provides a chance for students to explore a new country or issue.

The next Lecture will be Dennis Rodman, “Executed Uncles and Nuclear Threats: North Korea Under Kim Jong-Un” March 12 at the International House.

Students can pick up a schedule for these lectures at the International House. It is free and open to the public.