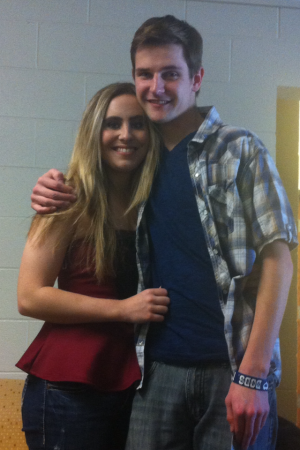 Valentine’s Day has come and gone, but love is still in the air for this young Washburn couple. Freshman Matthew Pflughoeft, Music Education major,  and sophomore Gentry Corka, Bio Chemistry major, make an admittedly odd, but no less successful couple. They have been in a mutually exclusive relationship for almost two years now, and their passion for one another is just as strong as it ever was.

“It will be two years on May twentieth,” says Pflughoeft with a smile.

“We started out just friends,” says Cork, “and we were actually pretty cruel to each other at times. He was a part of the group I hung around with, and I used to think, ‘Who is this weirdo?’”

It was only after having a conversation with him that Gentry realized they had much more in common then she had thought.

“He just said this really sarcastic retort. I don’t remember what it was, but I remember thinking ‘That is exactly what I would say!’ I’ve never heard anyone say something so similar to what I was thinking.”

As time went on, the couple became closer, sending numerous late-night txts and going out to the movies with their mutual friends until the day of Cork’s high school graduation when she kissed him, finally making their romantic intentions official.

“I was the initiator,” says Gentry.

When asked to compile a list of the most common reasons for failed relationships, these love veterans began with personality, compatibility and physical attraction.

“A relationship won’t work unless the people can get along,” Pflughoeft says. “Likewise, it is essential for the couple to actually find one other attractive.”

Next on the list of relationship mishaps is the old standard: Clinginess.

“That’s actually one of my favorite things about Matt,” says Cork. “In addition to loving his free spirit and open mindedness, I like that he’s not clingy. He has his own friends and his own life. He’s self sufficient.”

The last three Pflugheoft/Cork essentials to a successful relationship are Communication, Trust, and Compromise.

“Love is all about compromising,” says Cork. “One person can’t have their way all the time.”

Matt, what is your favorite thing about Gentry?

“She’s crazy. But in a good way! And she’s not high maintenance, which I appreciate.”

Have you two ever taken a relationship ‘break’?

What do you do for fun?

What did you do for Valentine’s Day?

“We went to the New Politic’s Valentine’s Day Concert and had a blast!”

Any last bit of advice?

Gentry: “I feel like a lot of young people are not willing to give long distance relationships a chance. They give up too easily- probably because dating has become so casual now a-days. After I graduated and went to college, I only saw Matt once a month. But I found that if you are willing to make the commitment, it can be worth the time and effort to go for it.

Also, a serious relationship benefits you. Even if it hurts, you always get experience out of it. So get out there and find that special someone you have been searching for!