Wiggins to lead the team 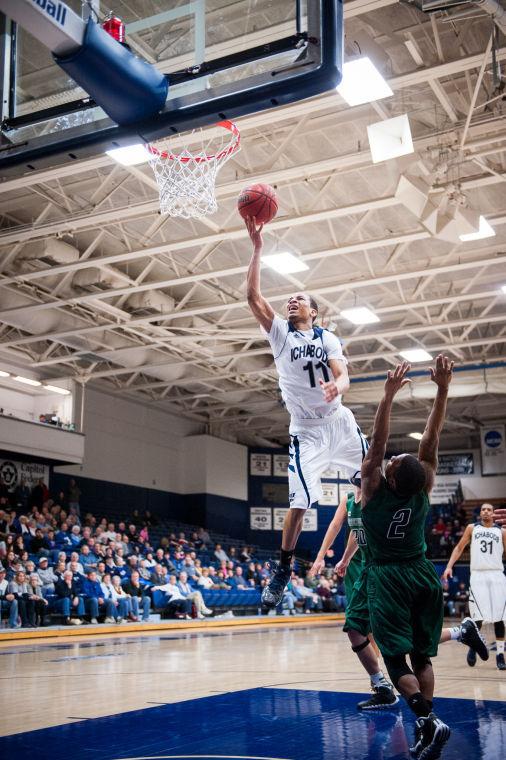 Kyle Wiggins fly's in for a layup at the end of the game, getting fouled in the process.

In the 2012-2013 season, then sophomore guard, Kyle Wiggins was fifth on the team in scoring with eight per game, This year as the only returning starter, he has taken over on the offensive end.

Last season all-American guard and current assistant coach Will McNeill was the team’s leading scorer and had the ball in his hands most of the time.

This season Wiggins has taken over nicely. While he’s 6’ 2” and smaller than most shooting guards, he is probably best suited for that position, but he is a bit of a tweener for the Ichabods. He has the ball in his hands to start most positions, even though Korey Fisher has started the game at point guard as of late.

“My role is to be a leader for the younger guys, control the ball and the game, and add to the scoring,” said Wiggins.

As one of three players to start every game for the Bods this season, Wiggins has made the most of the opportunities given to him. He leads the team in assists, with 3.7 per game, and he’s currently second on the team in scoring with 14.6. For most of the season he and fellow junior forward Alex North have gone back and fourth as the team’s leading scorer, but as of late Wiggins’ has reduced his shot attempts.

While he may be scoring a point of two less per game, he’s become much more efficient. After shooting 40 percent from behind three-point range last season, Wiggins seems to have lost some of his outside touch, shooting just 26 percent this year. To his credit, he has played to his strength: getting to the rim.

Everyone knows that it’s easier to score the closer you are to the basket, but getting there is an art form, and it’s one that Wiggins has become very good at. A combination of a quick first step, long arms, and the ability to finish through contact make him nearly unstoppable when he tries to take the ball to the rim. His ability, paired with the fantastic outside shooting from North and junior guard Jeff Reid allow the Ichabods to score from anywhere on their end of the floor.

“I’m a lot more confident this year,” said Wiggins. “The team looks to me a lot more this year instead of me looking to my teammates last season. As far as the team goes, I think this year’s team is a lot more balanced than last year’s.”

The team will need to lean on that versatility and youth down the road if they want to make it anywhere in the NCAA tournament. Wiggins and the rest of the Bods take on rival Emporia State at Lee tonight at 7:30 after the women’s game.