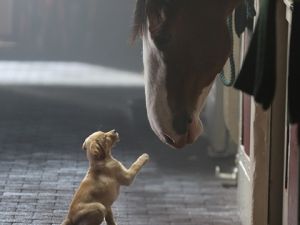 Sunday night saw the 48 Super Bowl, or Super Bowl XLVIII if you like Roman numerals, while the Seattle Seahawks fans had a night of “I told you so’s” and Denver Broncos fans went to hide in the corner and lick their wounds, the rest of us non-sports fans enjoyed the one night a year when we genuinely look forward to the commercial breaks.

The commercials seemed overly emotional to me this year. In the past they have been hilarious, but for some reason I felt like crying while watching most of them. (By the way, if you really want to impress the sports fanatic in your life, the final score was Seattle 43, Denver 8.)

Budweiser brought back their traditional Clydesdale horses. This year, they put a heartwarming twist on it, by adding a golden lab puppy who escapes the kennel and makes friends with one of the horses. The puppy is returned to the kennel. Undeterred, the puppy keeps returning to the stable and then, when the puppy gets adopted, the Clydesdales stops the car and the puppy gets to stay with them.

Bud Light aired a commercial of an anonymous guy named Ian who accepts a Bud Light on the terms that he is #upforwhatever. He then gets to ride in a limo, gets styled by Minka Kelly, defeats Arnold Schwarzenegger in a sudden death ping pong match, and goes to a twin party with the girl who gave him the beer and her twin then ends up on stage at a One Republic. Realistic? Not at all. But it sure glorifies drinking.

Doritos’ featured several commercials this year, all made by fans but paid for by Doritos. The first commercial was of sibling rivalry. Using the family dog as a horse, Little Sister wrangles her big brother, and the dog gets the chips. Which actually didn’t make a lot of sense now that I think about it. Another was called Time Machine and featured a 6-year old boy who tricks a neighbor into his time machine, which conveniently runs on Doritos. This one was definitely my favorite.

Coca-Cola also went for a heartfelt commercial, depicting the timelessness and lack of boundaries that is Coca-Cola. Their commercial was shot to look like home movies while in the background a woman sang “America the Beautiful.” The audio soon switched to children singing the tune in their native languages.

Steve Gleason, a former NFL player living with ALS, was the spokesperson for the Microsoft technology commercial “Empowering.” Here again was an emotional touch to the commercial.

Seinfeld had a reunion commercial which was actually quite entertaining. Jerry was the only person who legitimately looked like he had aged at all, which, considering the show was popular in the 90’s, is actually a little disturbing. The commercial did succeed in bringing the feel of the original show back to life though.

Radio Shack had an entertaining commercial that featured the 80’s coming to reclaim the store. It was meant to display the franchise’s updates to their store, but quite frankly, I had more fun looking for characters from movies I used to watch.