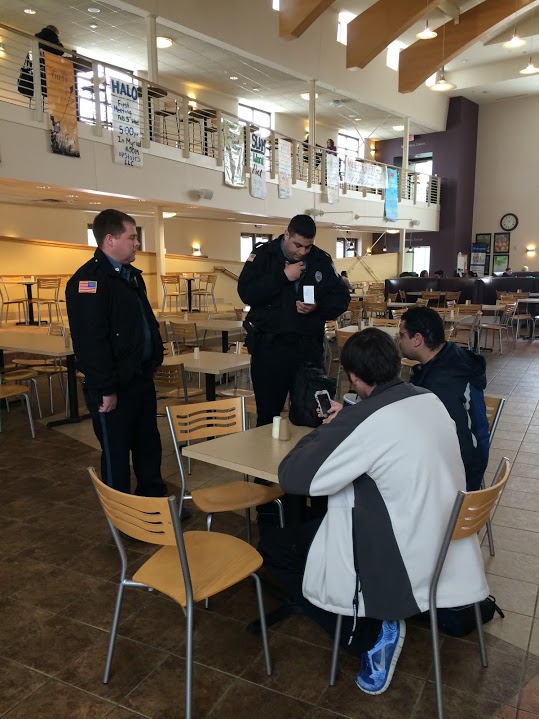 Officers Marcus Herrera and Andrew Putnam asking Raymond Vawter about his condition after his fall on ice. Students can view police reports filed at the WU Police office when open or read reports every week in the Washburn Review.

The shooting that took place Jan. 25, across from Washburn at 1516 SW 17th St. is being investigated by the Topeka Police Department.

Washburn Police notified the campus about the shooting immediately after it took place and many Washburn students expressed shock when receiving the email.

“I was intimidated and I did not know what was going on. I do not have cable,” said Shelby Adams, junior elementary education major.

Chris Enos, the captain of Washburn University’s police department, confirmed that this incident didn’t involve the campus itself.

“That was an isolated incident for sure,” said Enos. “We had our officers in that area during the incident until we determined what exactly had gone on and made sure the suspects didn’t come to campus.”

Although the incident didn’t have anything to do with Washburn, Enos provided some precautions for students.

“Be alert of your surroundings. Pay attention to what’s going on around you,” said Enos. “Notify the police if you see anything that concerns you.”

The shooting is not the only thing that worried Washburn students. The recent snowstorm also became some students’ concern.

“I was more worried about my safety a couple days ago when they did not cancel the school than the shooting,” said Adams.

According to the police report from Feb. 4-7, there was one student who fell down on the ice.

“I was walking to Carnegie on the sidewalk,” said Raymond Vawter, junior special education major. “I slipped on the ice and left a bruise on my left hand.”

A worker came by and helped Vawter to call the police and is now reported as feeling better.

“I feel pretty safe here,” said Makena Jarboe, freshman nursing major. “Though I don’t have any experience with the police, from what I see they are pretty nice. They will talk to us sometimes.”

The Washburn Police Department works to protect students and maintain a decent level of safety on campus.

“I love that we have the emergency help phones I can press if I need someone to escort me to my car at night. I appreciate it,” said Adams.