Schroeder dominates on and off the field 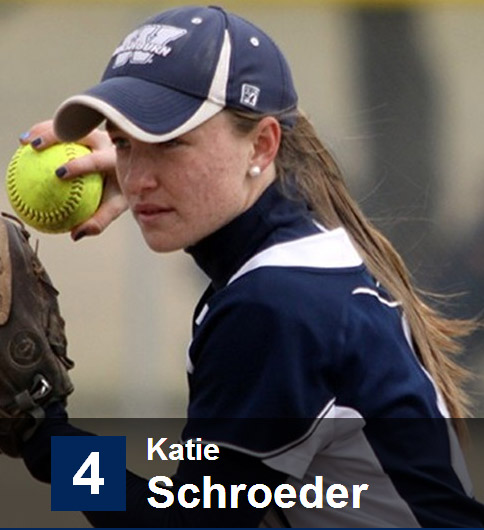 Katie Schroeder has been making big-time plays on the field at second base but the quiet girl from Osage City, Kan., looks forward to dominating in her last go around.

Katie Schroeder has been making big-time plays on the field at second base but the quiet girl from Osage City, Kan., looks forward to dominating in her last go around.

Schroeder looks forward to her senior year at Washburn after serving four years as a four-time, all-league selection earning all-state honors as a junior, which has been a huge accomplishment for her since freshman year.

“It’s good to see my hard work pay off with all the time and money my parents invested in me. I knew the outcome was going to be tremendous,” said Schroeder.

After the death of her mother her sophomore year in high school, Schroeder decided to fully commit herself by transitioning from point guard on the basketball court to an outstanding second base softball player.

“All the time and money I spent in the summer to compete at camps to elevate my game inspired me to make a vital transition, along with my mom passing away. said Schroeder “ I knew going to college to play softball was something that felt right I just wanted to make her proud.”

With years of experience under her belt, Schroeder’s position is considered one of the toughest and challenging positions, but by her junior year she dominated her responsibilities by earning all-state honors.

Schroeder has been known to be quiet and shy off the field since she began her career at Washburn, but her talent allows her to stand out from the rest.

Becerra, described Schroeder as a true grinder at her position and believes that she brings great competitiveness and humbleness to the program.

Schroeder was top 10 in the nation for hit-by-pitch standing at the ninth spot out of thousands of division II athletes. She plans on being the 1 hit by the end of the 56 game season. Schroeder’s toughness and development led to breaking the school record by being the first player in Washburn history to be hit by a pitch 26 times in her career,which is more than any Washburn player in school history.

“I have high expectations for Katie this season, she always stepped up in big situations getting that big hit or making that diving play, she’s a captain this year she as a quiet girl, but she has come out her shell to step up and take responsibilities,” said Becerra.

Schroeder also has high expectations this year for the team,.She loves the chemistry this season and understands that in order to make the national tournament this year everyone must be focused, motivated and dedicated because failing is not an option due to the mediocre season last year.

Katie not only has her eyes on the prize on the field, but in the classroom she has been a member of the All-MIAA academic honor roll list which has been a consistent trait for her.

“We have team study group that requires us to get in eight hours a week, which really helps my success as a student athlete. It helps me to stay on top of my grades,” said Schroeder.

Schroeder attends a camp called MITIOG every summer, which stands for made in the image of god. It is a week long summer camp located in Excelsior Springs, Mo.

The program is devoted to children born with spina bifida, which is a birth defect where part of the spine remains infused and open. Schroeder spends a week every summer to help these children exercise and to build relationships to bond and make these children feel special and important.

“All around, this camp has made me a better person. I’m always looking for ways to meet new friends and help out others in any way I can,” said Schroeder.