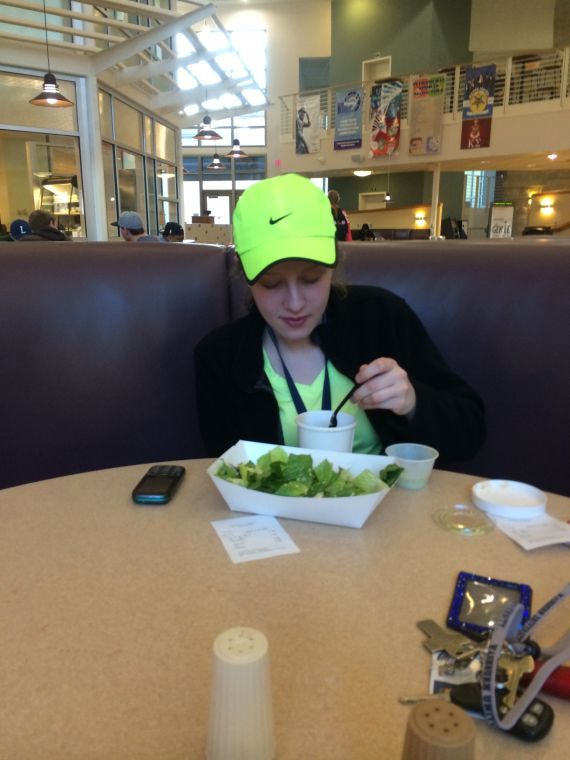 Shelby Ferguson gets her lunch from the Union Market. Limited choices is a common complaint among students.

Compared to last semester, the Union Market has made some changes in food but these changes hardly satisfy students, more and more Washburn students are becoming tired of food in the Union Market.

“I don’t like the food in the cafeteria, it’s not healthy. I think they should have more options instead of just fried food and the same things every day,” said Shelby Ferguson, a freshman athletic training and pre-medicine major. “They have salad and vegetables in the sandwiches, but that’s far from enough. They still need more fruit and vegetables because I don’t like eating fried food all the time.”

In order to eat healthy, Ferguson says she has to eat salads all the time. But when she is fed up with it, she finds food by herself.

“I will go to the Corner Store and get some stuff to make something, or just deal with it and choke it down,” said Ferguson.

“The food is horrible in the cafeteria and it’s not healthy,” said Tohge. “All I like is the salad.”

In addition, the price of food also pushes her to cook by herself.Tohge hopes a buffet can become one of the choices in the cafeteria.

“My friends at another university have buffets, and there are more choices,” said Tohge.

When it comes to the food issue, many international students fall victim to a lack of food variety.

“Compared with the food in Jordan, it’s really different,” said Ahmad Drou, a sophomore engineer major. “I have rice for every meal. I tried the rice here once and it was not good. It was dry and didn’t have any flavor so I stopped. I’ve been here for three semesters, but nothing has changed.”

Drou now cooks his own food because it’s healthier and cheaper.He suggests that the cafeteria can make one day of the week a special day, and have different meals.

Though many students are expressing their dissatisfaction with the cafeteria food, there are a few people who understand it.

“It’s not inexpensive. But I think it’s comparable to the price in other universities,” said William Roach, a professor from the school of business. “They always have the fried food; I can’t imagine that’s very healthy. Sometimes they only open the fried food line, but I’ll try to avoid the fried line. There is also a fair amount of food there.”

The Union Market plays an important role in WU students’ lives. Now the cafeteria provides food including fried food, pizza, burgers and salads. Out of these categories, students have very few healthy options.