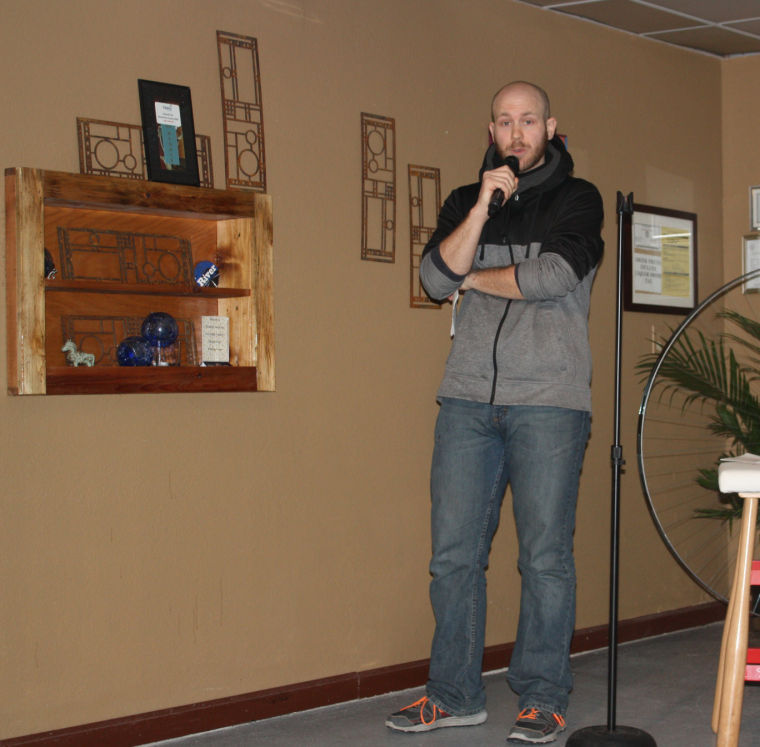 Over the last two years, the NOTO Arts District has become known as an oasis of budding creativity in Topeka, driven by the popular First Friday events, artists, musicians, craft-makers and performers of varied backgrounds and skill levels have made their way to the two-block strip of North Kansas Avenue to hone their craft and gain exposure.

However, one medium of expression has gone overlooked by the NOTO crowd thus far, and practitioners of this art can’t help but laugh about it.

Real estate agent by day and comic by night, Vicky Trembly has brought standup comedy to NOTO with an Open Mic Comedy Night, held every Monday at Riverfront Station 802.

A veteran of Topeka’s comedy scene, Trembly has been yukking it up on stage and in improv troupes for more than two decades. After taking a hiatus from standup to focus on improv, Trembly returned to the craft only to find lack of local stages on which budding jokesters can flex their comedic muscles.

“I wanted to get back into standup and there was no place to do it in Topeka,” said Trembly. “I’m kind of lazy and territorial, so I don’t like driving all the way to Kansas City for two minutes of mic time at three o’clock in the morning.”

The initial idea for an open mic comedy night started three years in downtown Topeka with the “So U Think U R Funny” events held every First Friday at The Break Room Metro Eatery. Initially a competition-styled combination of standup and improv. Trembly had to twist the arms of friends and co-workers to take part in what soon became a popular stop for out-of-town comics to come in and strut their stuff.

“Right now at The Break Room, I have three regulars who come out and get 15–20 minutes each First Friday then we open the mic up to everyone else,” Trembly said. “In NOTO, it’s strictly open mic. If we have a lot of people, everyone gets a little time. Those nights when we only have a few comics come out, everyone gets as much time as they want.”

Topekan Brad Metzger, who cracks jokes as his redneck alter-ego Bart Benekey and was among the first to join Trembly in her open mic adventures, has become a Monday night regular at the Riverfront Station and takes full advantage of the opportunity to test his new material. While he nearly turned down the initial offer to take part, Metzger has no regrets about taking the leap from the audience to the stage.

Another up-and-coming local comic, Alex Krumins, recently made his first appearance in NOTO when Trembly, who normally hosts on Monday nights, needed a last minute fill-in.

Krumins seized the opportunity for the extended mic time and worked the cozy, coffee shop-esque front room of Riverfront Station like a seasoned pro. Approaching his first year as a comic, Krumins pulled from previous and often uncomfortable experiences to keep the crowd smiling.

“Even on nights I don’t do well, I still have that desire to get back up and do it again,” Krumins said. “I don’t entirely shy away from it because I had one bad night and that’s why I think I might have some chops in this.”

Trembly invites anyone with a funny bone to make an appearance in NOTO and give themselves a few minutes to shine. As intimidating as that might sound for some, Trembly and the other comics offer an encouraging presence.

“That’s kind of my thing,” Trembly says. “I like getting people to get up there and see them just do it.”