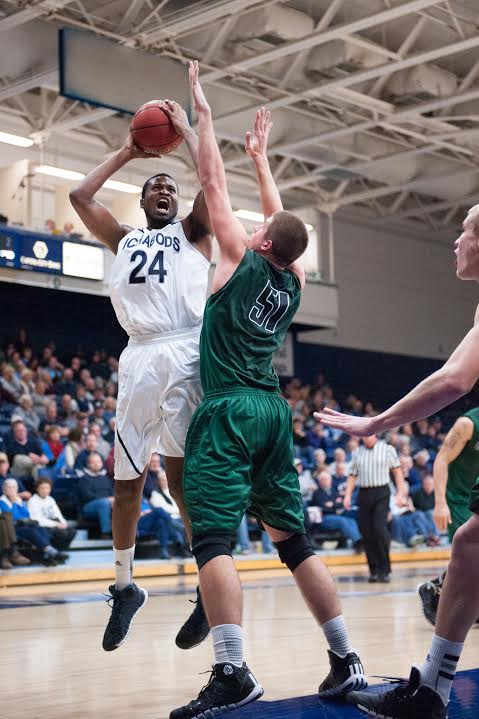 Stephon Drane goes up for a shot against Northwest Missouri State University. Drane transferred from Western Kentucky to become an Ichabod.

The Ichabod basketball team doesn’t have much experience or size on the 2014 roster, but what size they do have has valuable experience.

After playing two seasons at the University of Western Kentucky, the 6-foot-8-inch forward/center is currently averaging six points per game, though his presence on the floor is felt much more than that number may suggest.

Due to the Bods’ lack of a go-to inside scorer, they have to rely on drive-and-kick plays from junior guards Kyle Wiggins and Korey Fisher to get their excellent three-point shooters open on the perimeter.

While that’s not necessarily a bad thing, it’s not as dependable as being able to throw the ball into the post for easy baskets.

“When I’m in the game we become more of an inside out team,” said Drane. “We get it into the post and make a couple shots, which puts pressure on the defense and opens up the court for our guards to get shots.”

While he doesn’t get many opportunities, he makes the most of what he does get. Drane leads the team in field goal percentage at nearly 55 percent.

It’s important for him to take advantage of his shots inside in order to force teams to take the inside scoring threat seriously and get his teammates open.

After starting the first 10 games of the season, head coach, Bob Chipman has gone with a smaller lineup that has Drane coming off the bench, particularly against bigger teams.

Many players struggle to get into their offensive rhythm when they come off the bench, but Drane’s biggest strength is as a defender, which he doesn’t seem to mind playing.

“It doesn’t really change my approach,” said Drane. “I just have to be ready when my name is called.”

Drane and the rest of the Ichabods will take on Pittsburg State University at 3:30 p.m. this Saturday, in Pittsburg for their regular season finale. The Ichabods have already clinched a spot in the MIAA tournament.