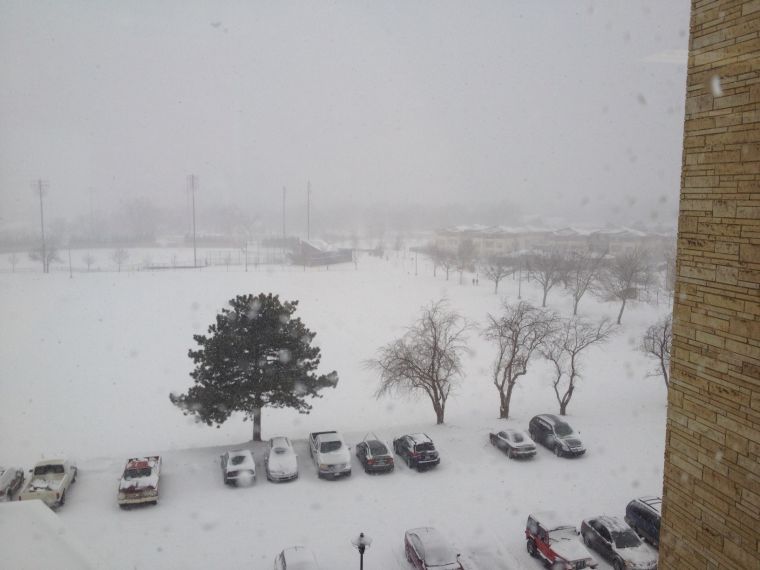 *Update: Washburn University and Washburn Institute of Technology will be closed and all classes are cancelled for Wednesday 02/05/14. Essential personnel report as required.

February 4 was a snow day for almost every school in Topeka, except Washburn University. Students hopefully waited for the notification but didn’t receive it until well into the afternoon, which even then only canceled classes starting from 2:15 p.m.on.

“It was a pain to come to school this morning,” said Ian Girdler, senior nursing major. “Pretty much everywhere else in northeast Kansas didn’t have school and the fact that we did was irritating.”

When it comes to school cancellations, Washburn has a policy to follow. What determines whether Washburn has a snow day depends on several different factors, and is decided on by an executive staff that includes the vice president of academic affairs, vice president for administration and treasurer, campus facilities director, police, local agencies and the president of Washburn.

According to Rick Anderson, vice president for administration and treasurer, Washburn takes into account both internal and external campus factors.

“We took into consideration things we already knew like the State closing and KU, K-State and Wichita State closing, but then again Emporia State and Fort Hays were still open,” said Anderson.

Anderson said those are all things they consider as they look at the weather. They also looked at the timing of when things are going to happen.

“Originally it [snow] was supposed to start coming down at three in the morning but it didn’t start until about seven this morning,” Anderson said. “So that’s part of determining ‘alright can we really get classes in before it really gets bad today.’”

With the light snow that occurred during the night, it was decided that Washburn would go forward and have classes. Because of graduation dates, Washburn can’t extend school days which is why.

“Clearly we want to provide students with classes that they signed up for,” said Jerry Farley, Washburn president. “Unlike secondary schools which simply extend the fall or spring term to get in all of the days of instruction, we can’t do that. So we try to get as many of those days completed as we can.”

With all the winter storm advisories and near-by cancellations, students were left wondering why Washburn hadn’t been concerned enough to cancel classes.

“Not everyone lives on campus and most people walk to get to campus,” said Girdler. “The fact that it seems they did not take that into account, is negligent on their part.”

“My drive to campus this morning wasn’t that bad. I took the main roads and had to drive much slower than usual though,” said Cara Gregg, junior sociology major. “People who had to drive out from a different town, like Lawrence, it was harder for them to come here.”

Though the executive staff knew evening classes were most likely going to be cancelled, they didn’t send out a notification until they were sure.

“Anytime that there are those kinds of uncontrollable weather events we have to think through what is the best thing to do,” said Farley. “The other major thing is you don’t know whether the forecast will be accurate or not.”

Farley said that in this situation of the snow day, the academic vice president and the vice president for administration have a number of different resources they reach out to in order to formulate a decision and they try to do so in a timely manner.

“We got the call that accumulations would occur in the afternoon,” Farley said. “So they concluded this morning at about 5 a.m. that the snow would hold off until later on in the day and we could proceed with morning classes.”

When it comes to snow days, universities make different decisions than public school systems. In general universities will not close unless they feel like they have to. Public schools have to take into consideration school buses and children. Whereas generally, according to Anderson, the view of universities is that people are adults and is it reasonably safe for them to carry on their business?

That determination to close for Wednesday will be based on whether people have the ability to go out and clear parking lots and sidewalks on campus and the city streets. In the end, it all depends on the timing of the snow and when it will stop.