New wave of anti-smoking ads on the way 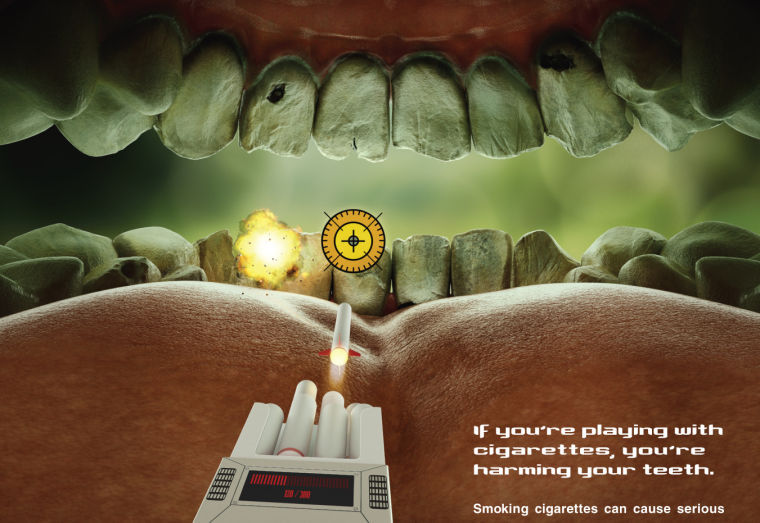 This undated image provided by the Food and Drug Administration shows the federal agency's new ad campaign featuring yellow teeth to show the costs associated with cigarette smoking. The federal agency said Tuesday, Feb. 4, 2014, it is launching a $115 million multimedia education campaign called “The Real Cost” that’s aimed at stopping teenagers from smoking and encouraging them to quit. Advertisements will run in more than 200 markets throughout the U.S. for at least one year beginning Feb. 11. (AP Photo/Food and Drug Administration)

Feb. 11 saw the debut of a new breed of anti-smoking campaign, one specifically targeted at minors that is being spearheaded by the United States Food and Drug Administration, for the first time in the history of the FDA these anti-smoking ads target those in the 12 to 17-years-old bracket.

The ads will reach teens over the mediums of television, radio and print. The anti-smoking ads will also appear in public places and on websites across the Internet.

The campaign which is referred to as “The Real Cost” campaign was developed to show teens “the real cost” of smoking. The campaign itself takes two routes of attack in its efforts to combat teen smoking.

The first of these methods outlining the health risks associated with smoking as seen before and has been the staple of anti-smoking campaigns since their creations. All of the old favorites risks from the days of D.A.R.E. are here: cancer, yellowed teeth and wrinkled skin to name a few.

The second method of attack, the far more interesting of the two takes advantage of the teenage desire for independence and control over oneself. It does this by demonstrating the loss of control a person undergoes after succumbing to the grasp of an addiction. They make this point in the ads by having a miniature unhygienic man, a metaphor for cigarettes, follow teens around barking orders at them and forcing them to “smoke” him.

The ad then concludes with the message that if teens wouldn’t take that kind of bullying from this man, they shouldn’t take it from cigarettes.

“I think it [the campaign] is great because there’s proven research that smoking can lead to lung cancer, and is a health hazard not only for them, but also people around that person,” said Hayley Harris, a junior psychology major.

The ad campaign cost is about $115 million and will run the course of a year with ads targeting more specific groups of teens being aired as the year progresses. Groups on the target list include smokeless tobacco users, Native Americans and teen members of the LGBTQ community.

“[The ads] are informative and really carry the message,” said Bruce Kamanga, a Washburn student pursuing his master’s in business administration, after watching a small sampling of the ads.