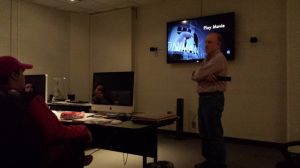 Charles Cranston has been teaching at Washburn in the mass media department for nearly 10 years. He teaches many film classes including digital filmmaking II, which is a fairly new class to the film and video program. Digital filmmaking II is a 400 level class where students get the opportunity to produce movies and learn about the preproduction planning in detail.

“One of the things that we are working on in this particular class is planning and organizational aspects of doing the small film projects, and that translates to anything really,” said Cranston. “You can improve the quality of a final product if you have done adequate planning early on.”

There are only nine students in the class, which makes it easier for them to have individual attention from Cranston. The film students are split into two different groups as crews where they are given specific responsibilities such as the director, editor, cinematographer, sound manager and assistant director to produce a short film.

Students say they truly enjoy working on these larger projects in a more advanced class.

“Most of the projects we have done up to this point have either been done alone or with a partner,” said Jeremy Finnestad, junior film and video major. “Since there are more people involved in one project, everyone has a specific job to focus on and that leads to a better final film.”

“I feel like this class is really helping me learn how to put a film together both in preproduction and postproduction, which is a super good experience,” said Montemayor.

Both of the film crews had their first screening last week.

“The films we saw today were good,” said Cranston. “Obviously, there were some things that could be corrected to make them even better and that’s mainly what we talked about today.”

The Washburn film department also has an excellent editing suite where students get to work with the AVID editing software, the same software that was used to cut “The Avengers” and many more films in the industry.

“They can’t really go back and reshoot anything, but there are a few things they can do to smooth things out to make things work a little better, and you can do that in the editing,” said Cranston.

Digital filmmaking II students have two upcoming films they will be producing before the end of this semester. The last one is going to shot in April and will be directed by Cranston.

He is also going to be bringing his friends from the film industry to work with the students for this film. All five films, including the final one, will be screened the last week of the semester either on or off campus. The location will be announced and is open to the public.