Fisher fishes for the home win 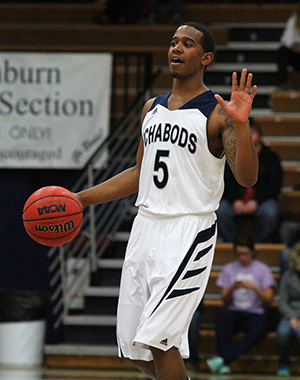 Junior guard, Korey Fisher, brings the ball down the court.

Typically, the point guard is the main distributor on any basketball team, however, when you have a team full of good passers, that duty gets shared amongst everyone.

Without much size in the starting lineup, the Bods need as much help from outside as they can get, and Fisher gives them just that. While he is just third on the team in assists per game, he is shooting nearly ten percent better from behind the arc and averaging an assist more per contest.

“The best part of my game is my ability to find ways to put the ball in the hole,” Fisher said. “With my crafty dribbling I’m able to pull up on my defender or drive to the lane, and I also have the vision to see my open teammates.”

With fellow junior guard Kyle Wiggins playing with the ball in his hands most of the time, Fisher’s shooting ability is of even more importance. When Deanes and Wiggins are on the floor together, it leaves two players that need the ball in their hand to be productive. Because their styles are similar, Deanes is a great replacement for Wiggins off the bench whenever he needs a breather or get in foul trouble.

“My role is to keep the team together, control the pace and tempo of the game, get the offense started, get my teammates good shots, as well as getting myself good shots,” Fisher said.

Fisher, at 6’ 2”, also gives the team a bit more flexibility on the defensive end of the floor. The New Jersey native is able to cover either the point guard or shooting guard on the opposing team, while Deanes, at 5’ 11”, is normally restricted to the shortest player on the other team.

“Defensively I’m good at reading the man I’m guarding and seeing if he can shot or if he’s a good driver,” said Fisher. “I’m long enough to play off of a faster guard and still be able to get a hand up on his shot, and if it’s a man who isn’t as fast I can get up on him and try to cause a turnover.”

Fisher, like most athletes, wants to continue playing basketball after his college career, and says he doesn’t want to make the same mistake he’s seen other players make by hanging up the jersey too soon.

“I would love to continue playing ball overseas,” he said. “I hear stories from guys before me and they always say they should have stuck with it and always tell me every chance they get to keep playing for as long as you can and that’s what I love to do.”

Fisher will take the court tonight as the Ichabods take on Fort Hays State at 7:30 in Lee Arena.